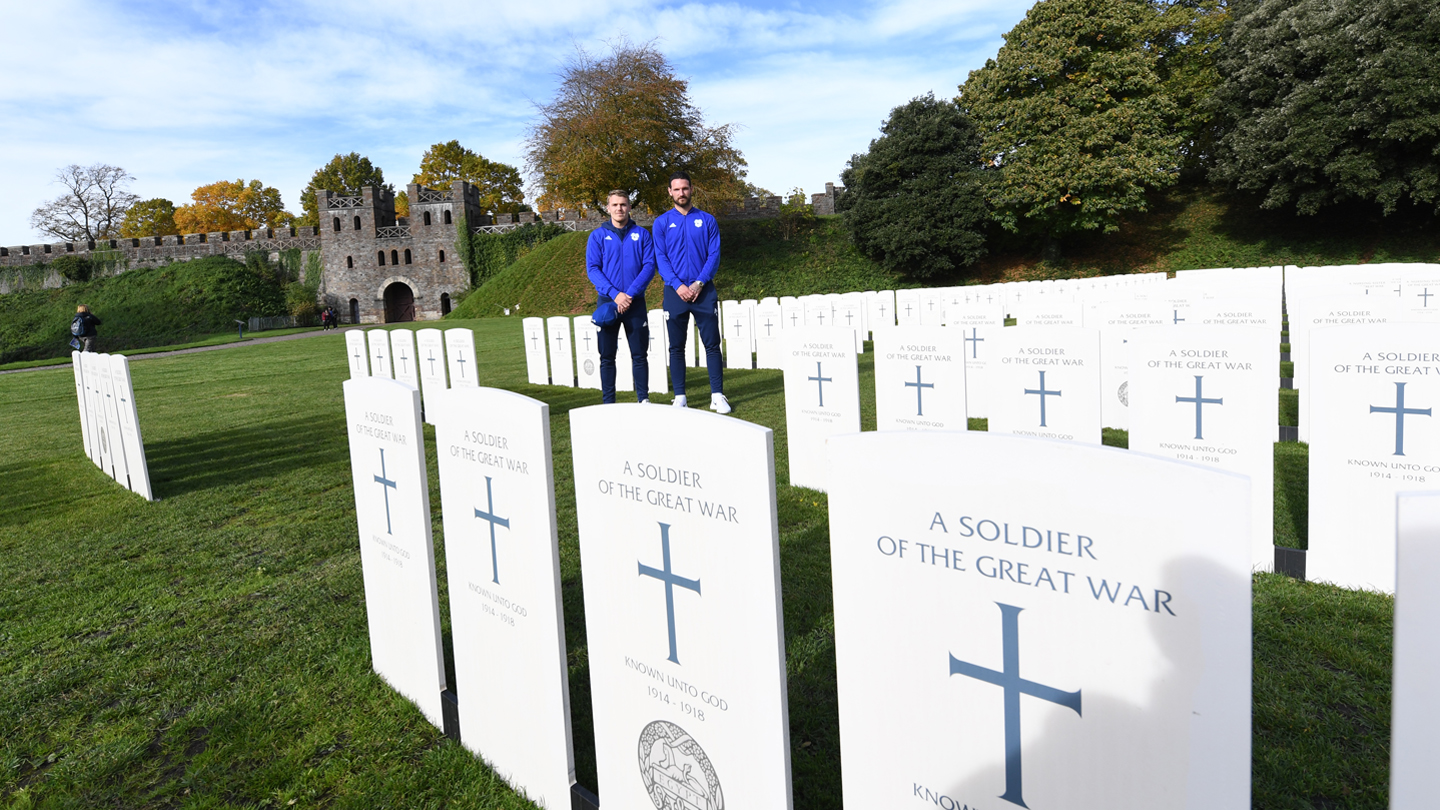 Leading up to the centenary of the Armistice of 11th November 1918, Sean Morrison and Danny Ward paid a visit to a replica Commonwealth War Graves Commission (CWGC) cemetery at Cardiff Castle.

A moving reminder of the Welsh sacrifices during the First World War, the newly-installed headstones represent the more than 30,000 Welsh war casualties from the First World War and highlight the different divisions which contributed to the war effort.

In the build-up to the Bluebirds’ commemorative fixture against Brighton & Hove Albion on 10th November 2018, Sean and Danny visited the CWGC exhibition, learning about both their family connections and Cardiff City’s involvement during the First World War.

A brand new @CWGC exhibition titled #ShapingRemembrance has today opened @FiringLine Museum. Alongside the exhibition a replica cemetery has been installed and was yesterday visited by @CardiffCityFC players Sean Morrison & Danny Ward as they learned more about the work of CWGC. pic.twitter.com/BjWri0n2en

They were joined by Dr Glyn Prysor, Chief Historian of the CWGC, who engaged them in conversation about the conflict and its impact on soldiers and the families they left behind.

A number of Bluebirds served during the First World War, including FA Cup-winning captain Fred Keenor, who was wounded in the Battle of the Somme a decade before City's 1927 triumph.

But Sean and Danny heard the stories of those who sadly lost their lives in the conflict, including Lord Ninian Crichton-Stuart – after whom our former home was named – former City goalkeeper Wally Stewart and young reserve defender Tom Witts, who was tragically killed on November 9th 1918 – just two days before the Armistice was signed.

We will remember them.

After a poignant visit to the replica cemetary at Cardiff Castle, Danny said: "We spoke about The Great War and remembered how many people lost their lives. It is moving to see [the headstones] - it really brings it home.

"We’ve learned about the footballers, but almost anyone was taken away from their normal job, and the next minute were on a battlefield. It’s really important that we always remember their lives."

Dr Glyn Prysor also spoke upon the launch of the Shaping Remembrance exhibition, saying: “As we approach the centenary of the 1918 Armistice, this is an opportunity to reflect on all those who lived through the First World War, and particularly those who lost their lives.

“I’m always moved to see the insignia of a Welsh regiment on one of our war graves, or to read a family inscription in Welsh on a headstone. You can find Commonwealth War Graves Commission cemeteries and memorials all over the world, as well as in Wales, and this installation at Cardiff Castle will give visitors a sense of their unique atmosphere.

“Our Shaping Remembrance exhibition tells the story of how the British Empire commemorated its dead and highlights several fascinating Welsh aspects of that long and emotional process. We’re particularly excited to share a letter from Hedd Wyn’s father which has never been on public display before.”

The Shaping Remembrance exhibition sits in the castle’s Firing Line Museum of The Queen's Dragoon Guards and The Royal Welsh and will be open until Saturday 15 December.