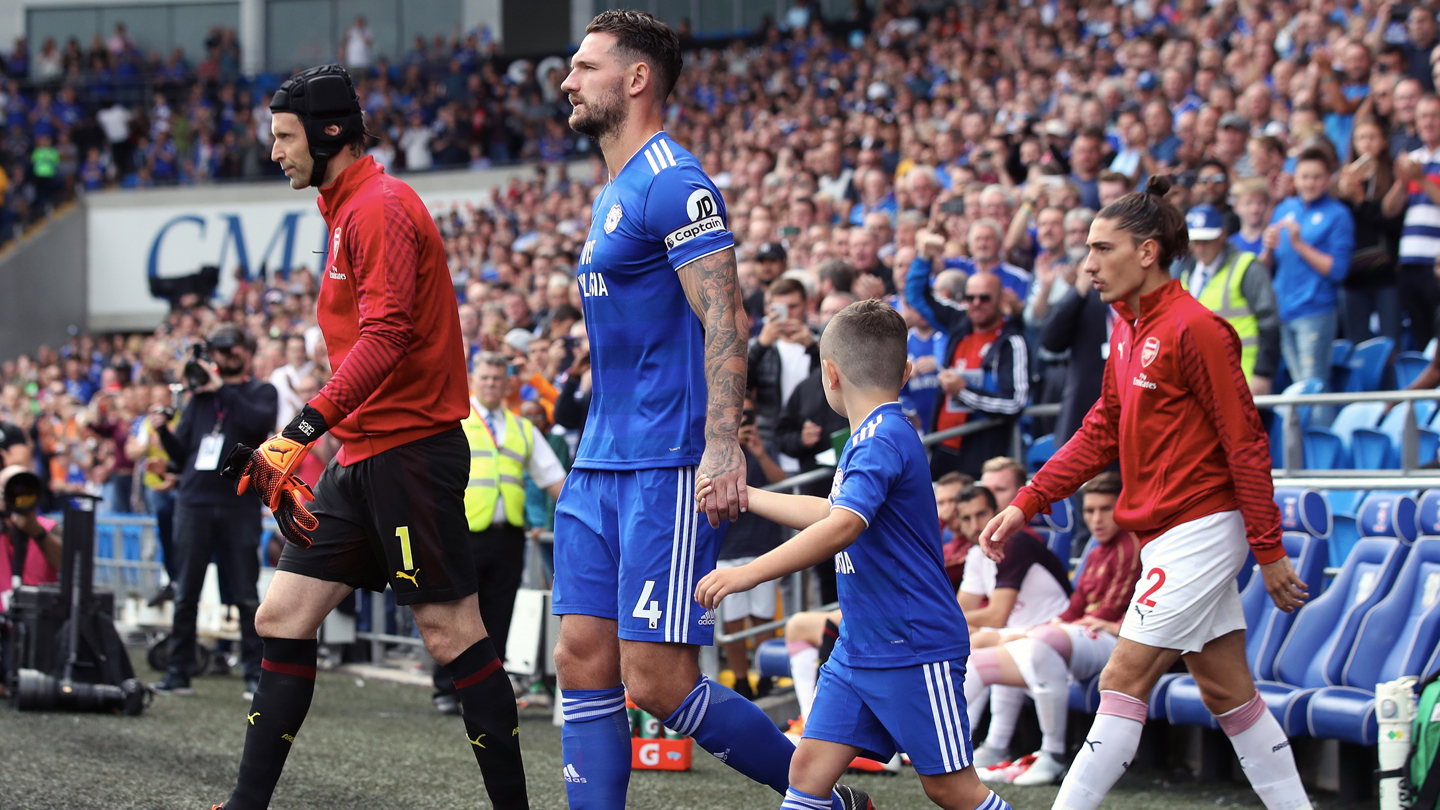 Match report for Cardiff City vs Arsenal on 02 Sep 18

The Bluebirds pushed Arsenal until the final minute, but fell to a narrow 3-2 defeat in an enthralling, end-to-end game.

Neil Warnock made three changes to the side that drew with Huddersfield Town last time out; Bobby Decordorva-Reid, Junior Hoilett and Danny Ward came in for Josh Murphy, Nathaniel Mendez-Laing and Kenneth Zohore. For Arsenal, Mesut Özil and Alexandre Lacazette returned to the starting line-up, replacing Henrikh Mkhitaryan and Alex Iwobi.

The Bluebirds had a golden chance after seven minutes, when Petr Čech’s sloppy pass gifted the ball to Harry Arter on the edge of the box. The midfielder fired a shot narrowly over the bar, ensuring a huge let-off for the Arsenal keeper. At the other end, Neil Etheridge was called into action by City Academy graduate Aaron Ramsey, who drilled a powerful low shot towards the CardiffCity stopper.

As the game continued at an intense tempo, Arsenal opened the scoring with twelve minutes gone. Granit Xhaka delivered an out-swinging corner into the box, which was perfectly met by Shkodran Mustafi. The German centre-back’s header was expertly dispatched into the top corner, leaving the unfortunate Etheridge with no chance. The Filipino goalkeeper did make an excellent save shortly afterwards, denying Nacho Monreal inside the area.

As the half progressed, both teams enjoyed further chances. For City, Bobby Reid’s acrobatic overhead kick flew just over Čech’s crossbar, before Lacazette struck the foot of the post with a fierce effort, that cannoned back out and away from two advancing Arsenal attackers.

The Bluebirds continued to put pressure on the Arsenal backline, with a number of dangerous crosses. Their pressure finally paid off as the clock ticked into injury time. Joe Bennett’s delivery was contested by Victor Camarasa and Monreal - the City man won the duel. Camarasa trapped the ball on the turn and fired into the roof of the net, netting City’s first Premier League goal of the season and sparking wild celebrations just before the half-time whistle.

The second half began with the Gunners searching for a second goal, though Etheridge was equal to every early effort. Arsenal’s goalscorer Mustafi almost doubled his tally in identical fashion, rising well to meet another Xhaka corner. This time, however, City’s No.1 was able to pull off a smart double-fisted save to maintain the scoreline.

However, Unai Emery’s side regained the lead just after the hour mark, with a fantastic strike from Pierre-Emerick Aubameyang. The Gabon international picked up the ball from Lacazette’s flicked pass, and curled a great strike into the far corner, putting the Europa League side back in front.

The Bluebirds instantly launched into action, in an attempt to get back on level terms. A succession of corner balls were poorly dealt with by the visiting defence, allowing City to deservedly draw level after seventy minutes. Sean Morrison flicked the ball on from a Joe Ralls corner, with Danny Ward in the perfect position. The lively striker produced a brilliant header, which bounced off the post before nestling in the net, putting the Bluebirds back on terms for the second time.

The game opened up again during the final fifteen minutes, with chances at both ends. Héctor Bellerin’s low cross was almost tapped home by Ramsey, before a vital block from Morrison and a Ralls clearance wiped out the threat. At the other end, Decordova-Reid burst through and shot, but his effort on goal was well held by Čech.

The result changed hands yet again with nine minutes remaining, as Arsenal went back in front. A clever ball by Lucas Torreira released Lacazette, who used his pace to nip around Sol Bamba and fire a powerful shot into the top corner, changing the dynamic of the match for the final time. The Bluebirds looked to get back in it once again, but Arsenal were able to dominate possession across the backline, giving away very few chances.

City’s final opportunity came in injury-time, when Morrison’s header from a Kenneth Zohore cross went over the bar. The game concluded with Arsenal taking the points, but not without a valiant effort from Warnock’s men. The Premier League now takes a two week break for international matches, but the Bluebirds will return with an away visit to Chelsea on September 15th.