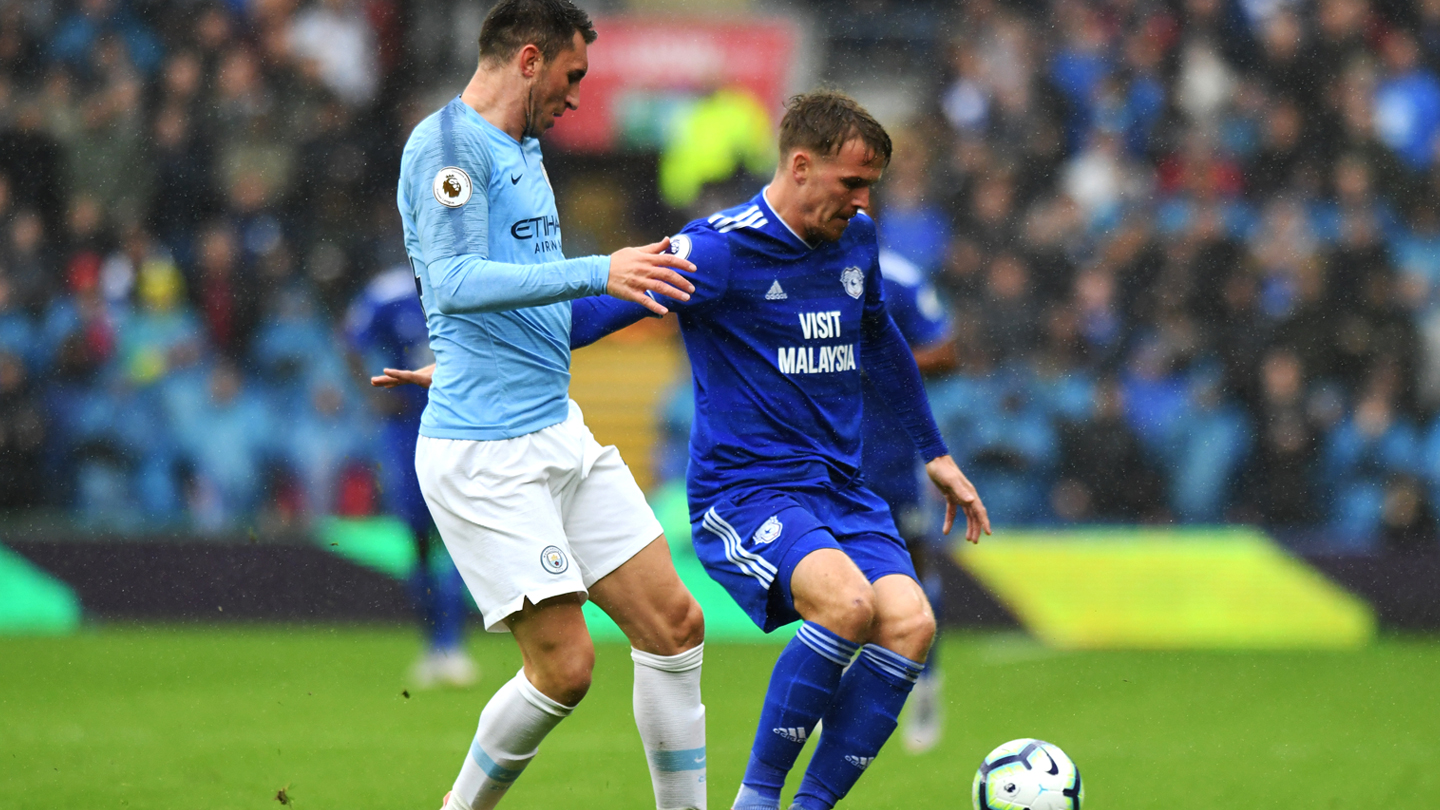 Pep Guardiola’s side took all three points at a wet and windy Cardiff City Stadium, showing just why they stormed to the Premier League title last season with a superb display against the Bluebirds.

Neil Warnock made two changes to the starting line-up that faced Chelsea at Stamford Bridge last time out; Lee Peltier replaced Sol Bamba, with Bruno Ecuele Manga moving into the centre of defence. Greg Cunningham also came in for his first Premier League start of the season, with Joe Bennett moving to the bench, after a knock in training. Manchester City, who lost to Lyon in the Champions League earlier this week, made three changes, with Nicolas Otamendi, Leroy Sané and Sergio Agüero returning to the starting eleven.

The reigning champions were not fazed by the poor weather conditions, moving the ball smoothly, as usual. However, the Bluebirds came out of the traps full of energy, and restricted the away side to few chances in the opening half an hour. The visitors went close through Sané; the German’s cross was poked towards his own goal by Peltier. Fortunately, Manga was on hand to turn the goalward ball over the bar for a corner. Ilkay Gündogan also went close as the game began to open up, but he fired over the bar from inside the box.

The Bluebirds threatened at the other end, with Junior Hoilett and Bobby Decordova-Reid linking up well. From the corner of the box, Reid’s attempt to find Danny Ward at the back post was intercepted by Otamendi at the last second. However, it was the visitors who broke the deadlock after thirty-two minutes, with the prolific Agüero on target. Bernardo Silva’s low ball found the striker, who made no mistake from twelve yards, slotting low into the bottom corner on his three-hundredth appearance for the Citizens.

City doubled their advantage a few minutes later, with Silva turning from provider to goalscorer. From a short corner, the Portuguese midfielder stooped low to get a header on goal. The looping connection flew towards the back post, and dipped under the crossbar to extend City’s advantage. The opposition showed their class and dominated possession until the end of the half, adding a third just before the break. After a flowing passing move, Gündogan unleashed an unstoppable shot which flew into the top corner, leaving Neil Etheridge with no chance, and sending the teams in at the break with a comfortable advantage for the away side.

The second period began much like the first, with a slow tempo and few chances. The pace of the game was not helped by a lengthy stoppage caused when Peltier went off injured, after some heroic last ditch defending. Decordova-Reid had the best chance of the half for the Bluebirds, but couldn’t quite connect with a lofted ball over the back four. Guardiola's men soon clicked into action, with Agüero and Sané going close from corner kicks. Etheridge was called into action a few minutes later, making a vital block to deny Raheem Sterling a certain tap in.

The lead was extended soon afterwards, as the visitors scored from an almost identical chance. A low ball across the box was perfectly place, with substitute Riyad Mahrez arriving to slot the ball in at the back post. The Champions League outfit continued to impress, with Etheridge doing well to keep out Sterling’s free-kick. The stopper was required once again late on when Phil Foden burst through on goal, but Etheridge got down well to save the young substitute’s powerful drive.

City added a fifth late on in cruel fashion, when the dangerous Mahrez picked up a loose pass on the edge of the area and fired into the bottom corner with pinpoint accuracy.

The Bluebirds battled all afternoon despite the tough defeat, and now face Burnley at home on Sunday, September 30th in their next Premier League fixture.