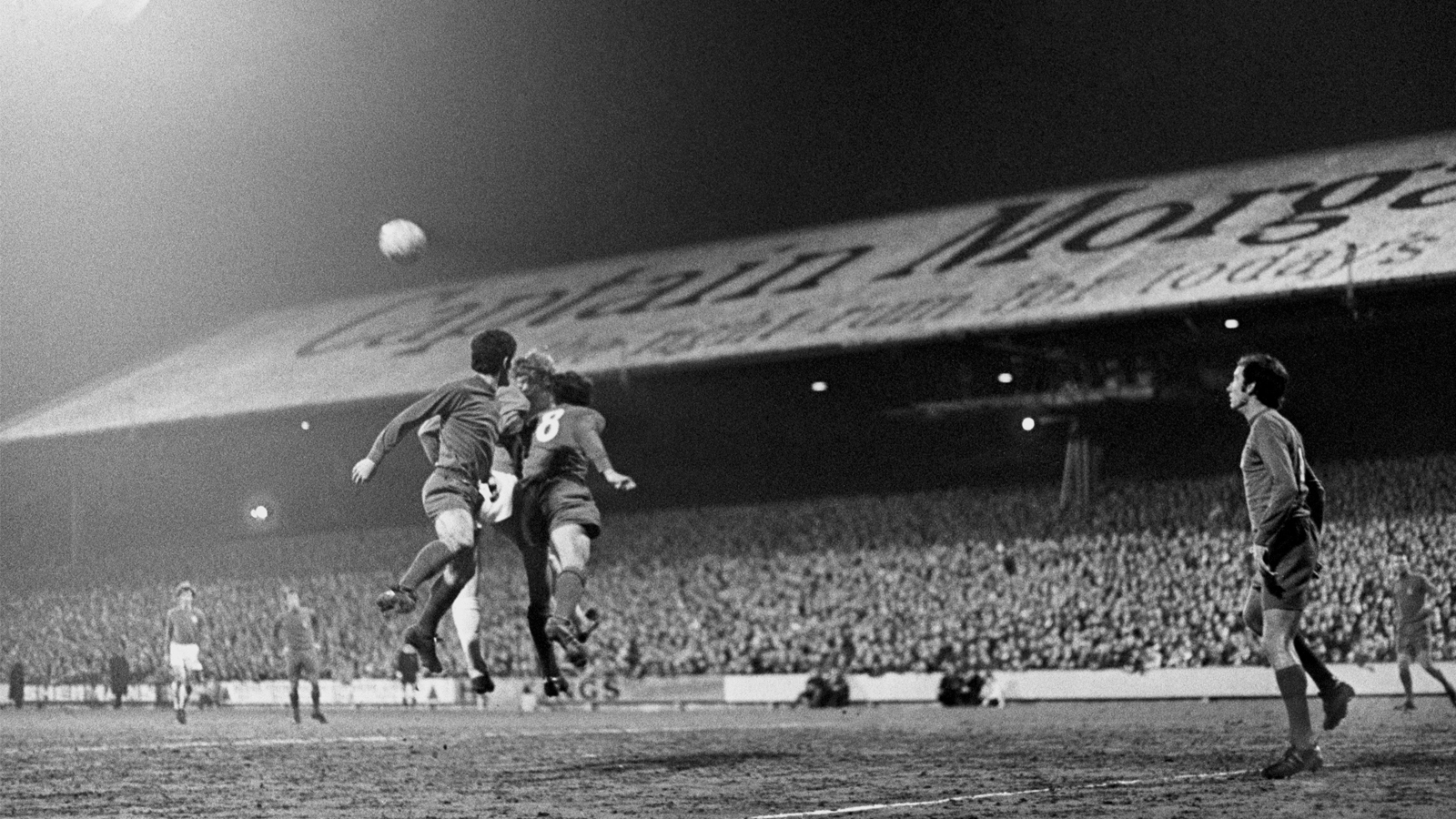 Celebrating 50 years since that magical night under the lights at Ninian Park...

On March 10th, 1971, the city of Cardiff was alive with anticipation. The Bluebirds had drawn Spanish titans Real Madrid in the Quarter-Final of the European Cup Winners' Cup, and with the first leg kicking off at Ninian Park at 7:30pm that evening, thousands converged for what would become a wonderful night in the Club's history.

Qualifying for the tournament by winning the Welsh Cup the previous season, the Division Two Bluebirds had defeated Cypriot outfit Pezoporikos 8-0 over two legs in the first round, before then beating French First Division club FC Nantes 7-2 on aggregate.

Meanwhile, Los Blancos had won the 1970 Copa del Ray to qualify for the European tournament, having beaten Valencia 3-1 at the Camp Nou. Domestically competing in La Liga, Real Madrid had won their league three times in a row between 1966 and 1969, with much of the same squad travelling to South Wales in March 1971.

Having been ever-present throughout all competitions during the 1970/71 season, former City defender Gary Bell recalled the build-up to that memorable night, 50 years on.

"It was fantastic, just the fact that it was Real Madrid we got drawn against," Gary told cardiffcityfc.co.uk. "From the moment the draw was made, the whole city of Cardiff was buzzing. They were all looking forward to the game so much, everybody was up for it and the clamber for tickets was unbelievable.

"I think that the official number of people in attendance was 47,500, though on the day I'd have thought it was more like 60,000 – it was absolutely chock-a-block!

"We'd played in front of crowds similar to that in the years before. We'd drawn Arsenal in the FA Cup which had brought in 55,000 at Ninian Park on the day, but it was really something to see that night."

Cardiff City's line-up that evening featured several players that have since gone down as Club legends in their own right. Captaining the Bluebirds from the back line was Don Murray. Having played for the Club since 1962, the Scotsman had previous experience playing against European opposition, including appearances in the 1968 Semi-Final of the competition against Hamburg.

Within the starting line-up were two other players alongside Bell and Murray who were ever-present throughout the 1970/71 season. Forward Peter King had, similarly to Murray, also featured against Hamburg three years prior, and had netted against both Pezoporikos and Nantes to help his side into the Quarter-Final draw against Real Madrid.

David Carver had joined City in 1966, forming a solid partnership as full-back with Bell (pictured below) and becoming a regular for the Bluebirds in the 1968/69 campaign. Ever-present for two back-to-back campaigns, 117 of the defender's 210 City league appearances were made consecutively.

Gary described the match that followed, and of course the iconic 31st-minute goal that nobody present would forget in a hurry, nor since.

"The match had started a bit cagey for the first ten minutes or so," he continued. "But once we got into the rhythm of the game and found our flow I think we were the better side.

"I'd won the ball for a tackle half-way inside our own half and knocked it to Bobby Woodruff. He passed it to our left winger Nigel Rees, who put in a great left-footed cross to find Brian Clark who was coming in at the penalty spot to head in a fantastic goal!"

"When the ball hit the back of the net, the noise was absolutely phenomenal." Gary recalled. "I've never, ever heard a noise like it. Standing on that pitch when the goal went in, it was like being stood in an amphitheatre, to be honest.

"We had a really good back four, with Jim Eadie behind us, and we tried to defend as we normally would. We dealt with their attacks really well, and on how the match went I think we should've won it by more than one goal.

"We went in at half-time one up and full of confidence. Jimmy Scoular, our manager, said: 'Right, we're playing well. Just get out there for the second half playing exactly the same, and hopefully we can score again.'

"We set out well in the second half, and created several chances, but couldn't put the ball in the back of the net again, so we took the 1-0."

Brian Clark's goal against Real Madrid was his fourth of the tournament, going on to be top goalscorer for the Club that season. The departure of young striker John Toshack for Liverpool a few months prior had meant that City acquired the services of Alan Warboys from Sheffield Wednesday who, like Toshack, was an able goalscorer.

However, with the in-form Warboys ruled out ahead of the Quarter-Final at Ninian Park, Clark was left without his regular strike partner for the big match. Reflecting on his performance immediately after the final whistle, the striker said: “No goal has ever given me greater pleasure and I don’t suppose I’ll ever get one to please me as much again.

“Not surprisingly, most of the reports before the game were pointing out that Alan Warboys was not eligible to play. It’s very hard to fill the boots of someone like Alan, who whacked four goals against Carlisle the Saturday before.

“I wouldn’t say I was on a hiding to nothing, but I knew what was expected of me and I knew that I hadn’t been playing very well recently. But to score the only goal in any match is pleasing. To score it against Real Madrid – that is something I only dreamed about.

“The cross from Nigel Rees was great. I got in front of their number five and it was the type of chance you can sometimes make more difficult because you have more time to think.

“I tried to put it to the goalkeeper’s left. It went a bit closer to him than I intended, but I knew before I fell over that he couldn’t get to it.”

Running straight towards the assisting Rees (pictured below) upon scoring, Clark made sure to celebrate with the 17-year-old winger, who was making only his 12th appearance in a City shirt, following time spent playing for the Bluebirds' youth sides.

Having defeated their opponents, the Bluebirds had recorded a famous victory that put them in good stead ahead of the away leg two weeks later. It was not just the players who were delighted with the result, however, as Bell was well aware come the final whistle.

"The fans invaded the pitch in those days," Gary laughed. "They did after any game really, but that night it was just a sea of bodies on the field congratulating us. It was phenomenal, really. It was a great feeling, to be a part of it.

"Real Madrid was a great team to draw, for everybody connected with the Club. The match made us feel like we were within touching distance of the Final, really. To beat them 1-0 in front of our supporters was fantastic, and I would say one of the greatest nights in the Club's history.

"The support was great for the away leg too, of course. I think around two planes full of City supporters made the trip to the Bernabeu, which really was something special.

"Playing at the Bernabeu was superb. It's always been a great stadium, and you really got a feel for the history of the place once you were in there."

Speaking after the match at Ninian Park, it was clear to all that Jimmy Scoular was beyond proud of the performance put in by his side that night.

"Although we deserved to have won last night by at least two clear goals, whatever happens in Madrid, they still have to score two clear goals to beat us," he said.

“And whatever happens, nobody can take anything away from the players for their wonderful show. For me they were great, just great.”

The long-serving boss had managed City throughout the latter half of the 1960s, and understood the difficulties of playing away from home on the European stage better than most managers at his level.

Likewise, Miguel Munoz's own substantial experience as a two-time European Cup-winning manager made him seem eager to play the return leg at his home ground. Complimenting Cardiff City for their style of play following the match, he stated: “We played a defensive game. Cardiff played a lot better than when I saw them in the league and they are a difficult side to beat. But in the Bernabeu we shall attack.”

And attack they did. Two second-half goals for the Spanish hosts were left unanswered by City, who were subsequently knocked out of the tournament in Madrid. Our opponents would go on to face Chelsea in the final of that season's competitions – losing 2-1 in the replay in Greece.

Despite their cup run coming to an end, it's clear that the experience of playing against one of the most successful clubs in European football history has a special place in the heart of Gary Bell. An experience that he is proud to have shared with both his teammates and the City faithful in the stands that night, 50 years ago.

"The thing that I take away from that experience, despite of course defeating Real Madrid at Ninian Park, is that it's a match that is still talked about today," he smiled.

"People still refer to it when they see me: 'Oh Gary, I was there at the match when you beat Real Madrid.'

"It's a lasting memory both for myself and the supporters who were there, and always will be. It's one for the record books, and part of the Club's folklore, really."

That goal! That noise! ?