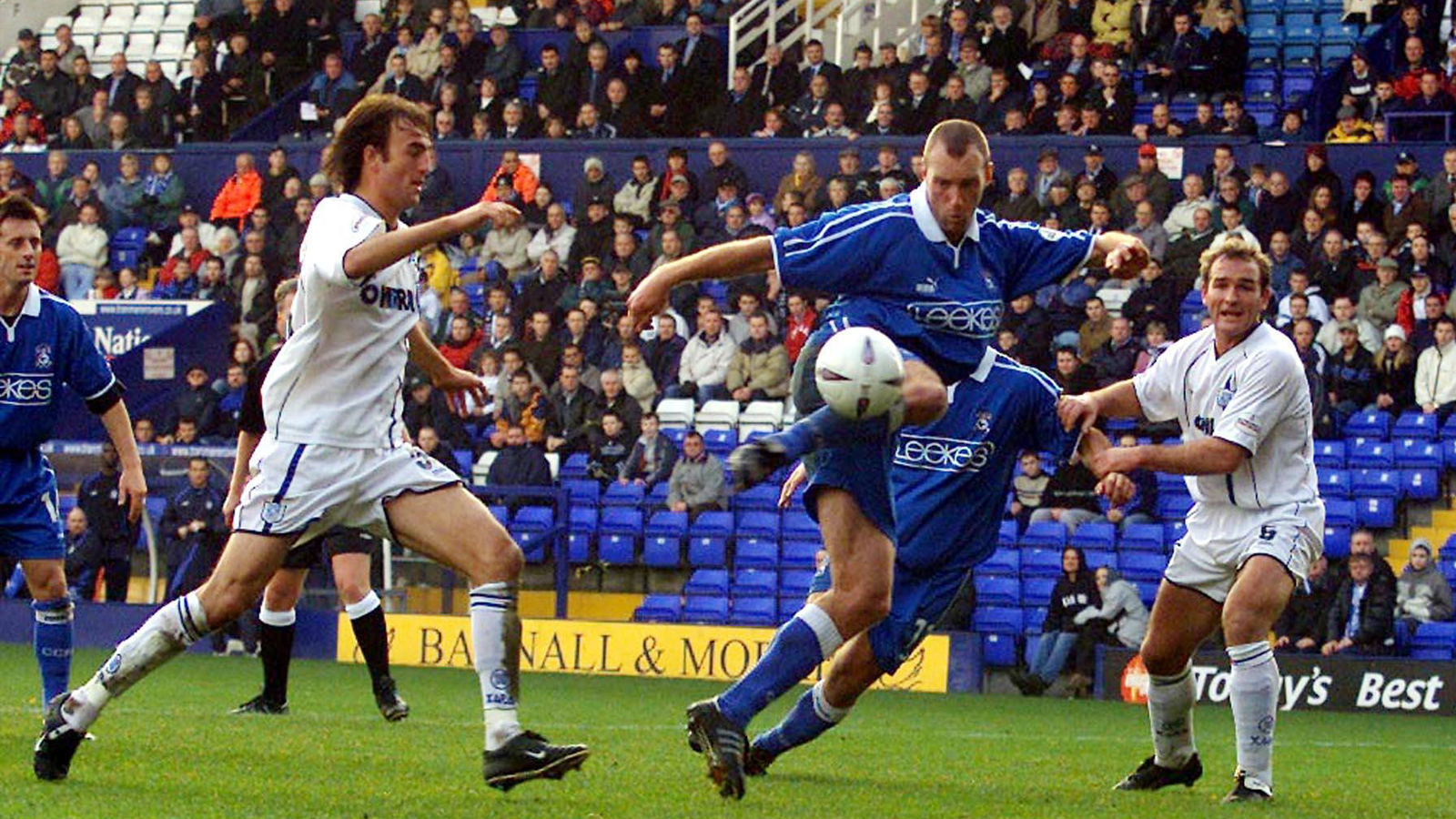 Ahead of City's match against Derby County on Friday night, we take a look at a man who played for both sides during his career, and his run with the Bluebirds that culminated in the club's 2003 promotion to Division One... 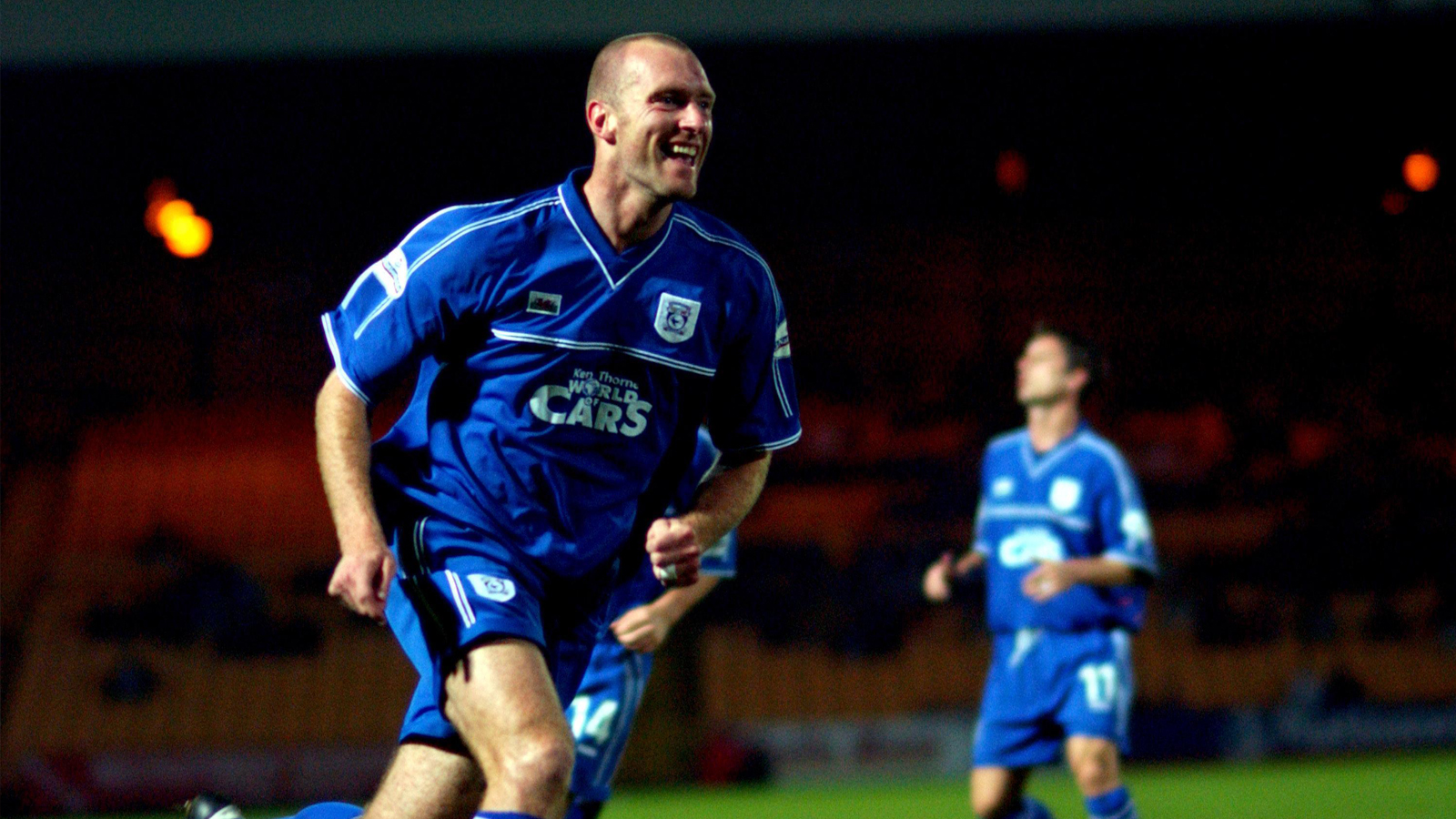 At the beginning of the 21st century, Cardiff City was a club in the process of change. Having been promoted at the end of the 2000-01 season to Division Two, the club had nearly been promoted again in the following season to Division One at the end of the following season, as the Bluebirds were knocked out of promotion play-offs in the semi-finals against Stoke City.

One of the players who joined City upon their promotion to Division Two was Spencer Prior. The central defender joined the Bluebirds from Manchester City, having previously played at sides such as Norwich City, Leicester City and Derby County. Whilst at Derby, Prior made 54 appearances across two seasons for the Rams, who at the time played in the Premier League, finishing 8th and then 16th on the league table in his time at the club.

Prior featured heavily in the Bluebirds’ 2001-02 season, playing in 44 matches in all competitions as City reached the play-off semi-finals, finishing fourth on the Division Two league table with 83 points, only one point behind automatically promoted side Reading.

Remaining in Division Two for the 2002-03 season, City began the campaign strongly, losing only one of their opening ten matches.

Robert Earnshaw and Peter Thorne’s attacking partnership proved very successful as the season progressed, with the two being ever present in the team throughout the league campaign, playing in all 46 matches of the regular season.

Of City’s 68 goals scored throughout the regular league campaign, 34 of these were scored by either Earnshaw or Thorne, with their prolific goalscoring ability leading to the Bluebirds finishing sixth on the Division Two league table.

With a total of 81 points, City had secured their place in the play-offs, narrowly beating Tranmere Rovers to the spot by a single point.

Drawn against Severnside rivals Bristol City for the play-off semi-finals, the Bluebirds first hosted the Robins on May 10th, 2003 at Ninian Park.

Despite a relatively poor run of form in the games preceding the first leg – with City getting only two points from their final five matches of the league campaign – the Bluebirds’ defence proved insurmountable for the Robins, who some considered favourites for reaching the play-off final at the Millennium Stadium.

Towards the back, the likes of Andy Legg and Chris Barker played alongside Prior, all of whom had made well over 40 league appearances in the 2002/03 campaign.

The experienced City side held their composure to keep a clean sheet in front of the home crowds at Ninian Park, with Peter Thorne scoring in the 74th minute from a Willie Boland cross, heading in at the far post. 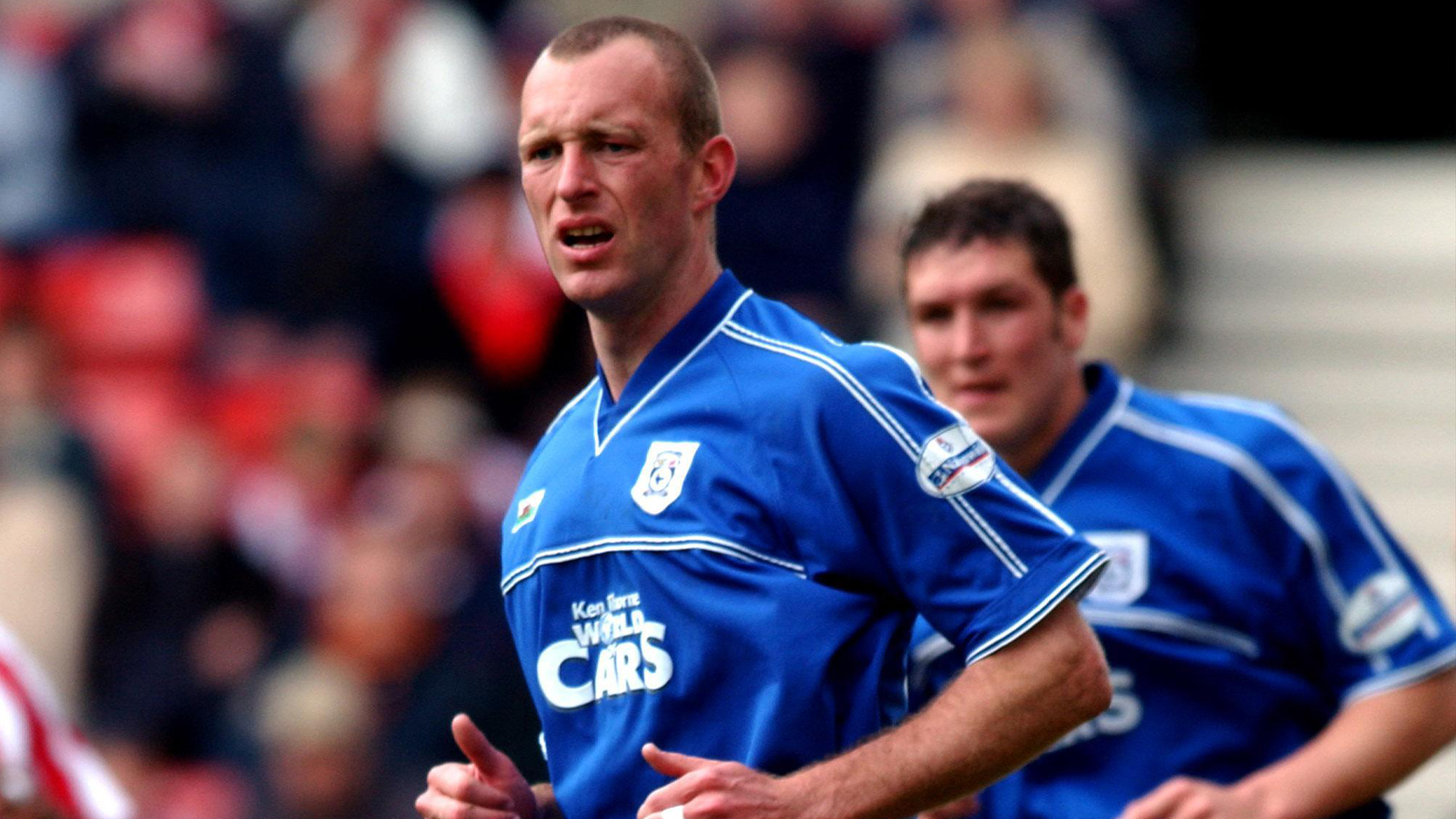 Visiting Ashton Gate days later on May 13th, City’s defence was once again tested as the Bluebirds secured their place in play-off final.

A 0-0 draw in Bristol proved the result from the fixture, with City’s defenders working hard to keep the Robins without a chance at scoring. Goalkeeper Neil Alexander was also hard pressed throughout the 90 minutes, denying forwards Chris Roberts and Lee Peacock on several occasions with impressive diving efforts from all angles.

Following the final whistle, then-Cardiff City manager Lennie Lawrence, coming to the end of his first full season as manager of the club, heaped praise on City’s backline:

"That was the best defensive performance we have given since I arrived at Cardiff, without a shadow of a doubt.

“We were absolutely determined and although it was never the plan to have to defend for 35 minutes out of 45 in the second half, we were simply forced back by Bristol.

"But credit to my lads, they were up for it big time and I think over the two legs we deserved to go through.” - Source: BBC Sport

Cardiff City faced Queens Park Rangers on May 28th, 2003 at the Millennium Stadium in Cardiff. The highly anticipated fixture saw the two sides line up in the Bluebirds’ home city, and was dramatic throughout as both sides searched for an opening goal. City started looking the stronger side, pushing into QPR’s half on several occasions and coming close to scoring with chances for Robert Earnshaw, Graham Kavanagh and Peter Thorne in the first fifteen minutes.

The match levelled out as time went on, but still no goals were scored despite the chances at both ends. The match reached extra time with the match remaining 0-0, Prior being among the City players called upon to play for the full 120 minutes.

In the 114th minute of play Andy Campbell marked his place in Cardiff City history. Introduced to the field earlier as a substitute for Robert Earnshaw, Campbell – who hadn’t scored a goal since January 2003 – received a long pass from Gareth Whalley, which sailed over the head of QPR defender Danny Shittu and into the path of the striker.

On his first touch and at the edge of the area, Campbell hoisted the ball over Chris Day, who could not reach the shot as it flew over the goal line, giving City a long sought-after lead. The Bluebirds held tight for the remainder of the match, not allowing an equaliser despite QPR’s best efforts. With the match won, the Bluebirds had made it to Division One, marking their return to the second tier for the first time since 1985. 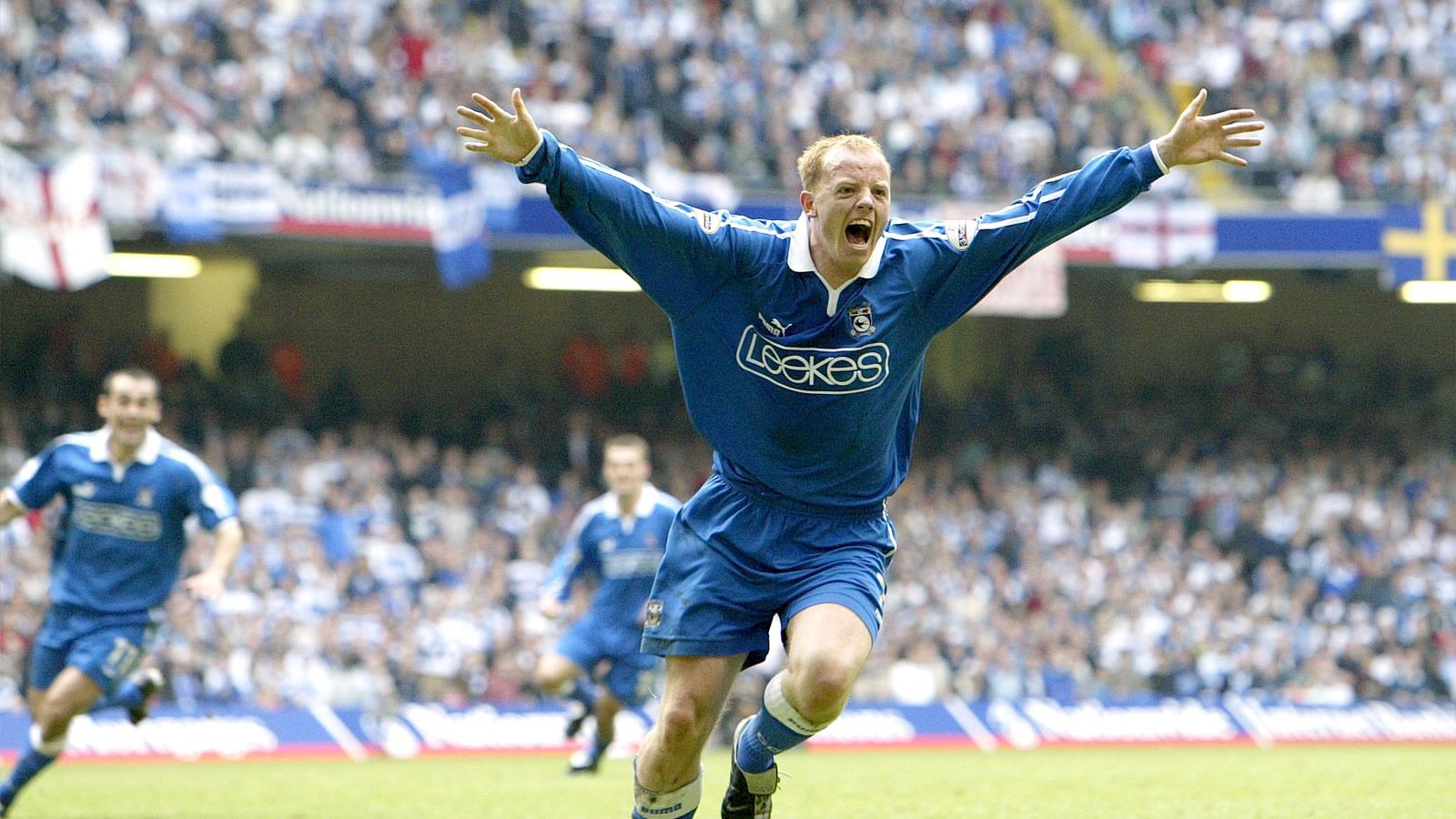 Having made 40 league appearances for Cardiff City throughout the 2002-03 season, Spencer Prior provided a level of stability to the Bluebirds’ defence that helped the team to work their way towards promotion into Division One, now known as the Championship.

Leaving the club in 2004 for childhood club Southend United, he made nearly 100 appearances for the Bluebirds in all competitions across three seasons at Ninian Park, and later turned his attention to managing for sides such as Australia Women and Thailand Women.