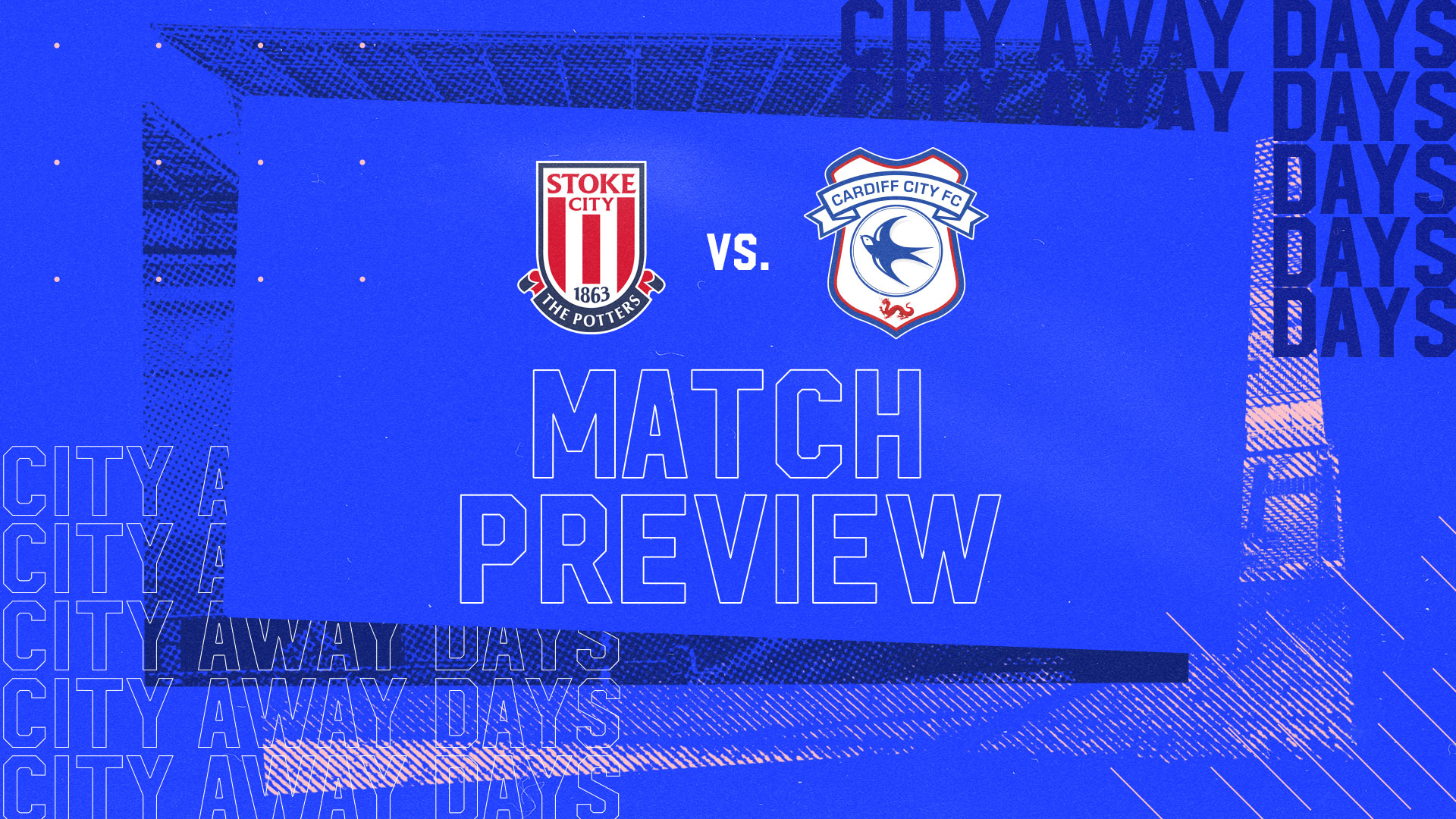 City will head to the Bet365 Stadium on Saturday, 30th October, with kick-off in Staffordshire at 3pm.

Cardiff City TV will be bringing you the latest from the Bet365 Stadium as City face the Potters on Saturday afternoon.

This fixture has been selected for television broadcast internationally. As such, Cardiff City TV can only offer Audio coverage in the UK & most international countries. Video Passes are available in dark markets*.

Read our Away Days Info Guide ahead of Saturday’s trip to the Bet365 Stadium.

The Potters are one of seven Championship clubs currently sitting on 21 points, and find themselves occupying 9th position coming into Saturday’s fixture. Michael O’Neill’s men find themselves sitting behind 5th place Luton Town on goal difference alone, but are themselves being closely chased by Millwall, Blackpool and Blackburn Rovers. Stoke have won six of their 14 Championship matches so far, drawing three and losing five.

After last season’s 14th place finish, O’Neill’s side made a vastly improved start to the new campaign, which saw them go unbeaten for four matches. The Potters defeated Reading, Swansea City and Nottingham Forest in the early weeks of the campaign, drawing with Birmingham City, before suffering a 3-0 defeat at Fulham. A strong set of home performances helped Stoke to further wins over Huddersfield Town, Hull City and West Bromwich Albion before the recent international break.

However, results at the Bet365 Stadium have taken a turn since the return of domestic competitions on October 16th, with the Potters suffering three straight defeats in the past fortnight. Stoke returned to league action with a 2-0 defeat to Sheffield United, before suffering their first home defeat of the season against AFC Bournemouth. Ex-Stoke boss Gary Rowett came back to haunt his former club last weekend, with Millwall recording a 2-1 win at The Den to see the Potters slip towards mid-table rather than climb towards the top six.

Sam Surridge signed a four-year contract with Stoke in August, joining the Potters from fellow Championship side AFC Bournemouth. The striker came through the youth ranks at the Vitality Stadium, enjoying early-career loan spells with local sides Weymouth and Poole Town, before prolific stints with Yeovil Town and Oldham Athletic. Surridge spent the 2019/20 campaign with Swansea City, scoring on four occasions, before making his Bournemouth breakthrough last term. The 23-year-old has made 13 league appearances at the Bet365 Stadium, scoring twice.

Mario Vrančić departed Norwich City upon the expiration of his contract last season, signing for Stoke on a one-year deal. The central midfielder made over 130 appearances for the Canaries during his time at Carrie Road, and adds valuable experience of winning promotion to the Premier League on two occasions. The 32-year-old, who has made six appearances for the Bosnian national team, has featured on 14 occasions for the Potters thus far, scoring once and providing five assists for teammates.

Romaine Sawyers made 19 Premier League appearances for West Bromwich Albion last season, but could not prevent the Baggies from suffering an immediate relegation back to the second tier. Having fallen behind Jake Livermore and Alex Mowatt in the pecking order at The Hawthorns, the midfielder made a late-August loan move across the Midlands to the Bet365 Stadium, and has made nine league appearances to date. The 29-year-old scored his first goal for the Potters against Millwall last weekend, but could not prevent his side from slipping to a 2-1 loss.

Jacob Brown joined the Potters from Barnsley in 2020, having been a consistent performer during his time at Oakwell. Capable of playing as either a winger or a striker, Brown featured alongside Kieffer Moore as the Tykes won promotion to the Championship during the 2018/19 campaign, and was soon snapped up by Stoke after a promising debut season in the second tier. The 23-year-old netted on six occasions during his first season at the Bet365 Stadium, and has already recorded three goals and three assists in all competitions this term.

Tommy Smith captained Huddersfield Town during their Premier League seasons between 2017 and 2019, but swapped West Yorkshire for Staffordshire after the Terriers dropped back into the second tier. The right-back has since gone on to make 84 appearances in all competitions for Stoke, racking up an impressive 11 assists during that time. Four of Smith’s assists have come during the current campaign – with a brace of goals created against Reading on opening day – whilst the right-back has also supplied goals for teammates against both Swansea City and West Bromwich Albion.

Nick Powell was Stoke’s standout performer in the 2020/21 season, with 12 goals and three assists in 39 matches. The former Manchester United man joined the Potters from Wigan Athletic in 2019, and, after initially struggling with injuries, has become a focal point within Michael O’Neill’s side. This term, the 27-year-old has netted five goals in nine league outings, picking up an assist during City’s 3-2 opening day win over Reading. However, Powell looks set to miss Saturday’s fixture after sustaining an injury against Bournemouth.