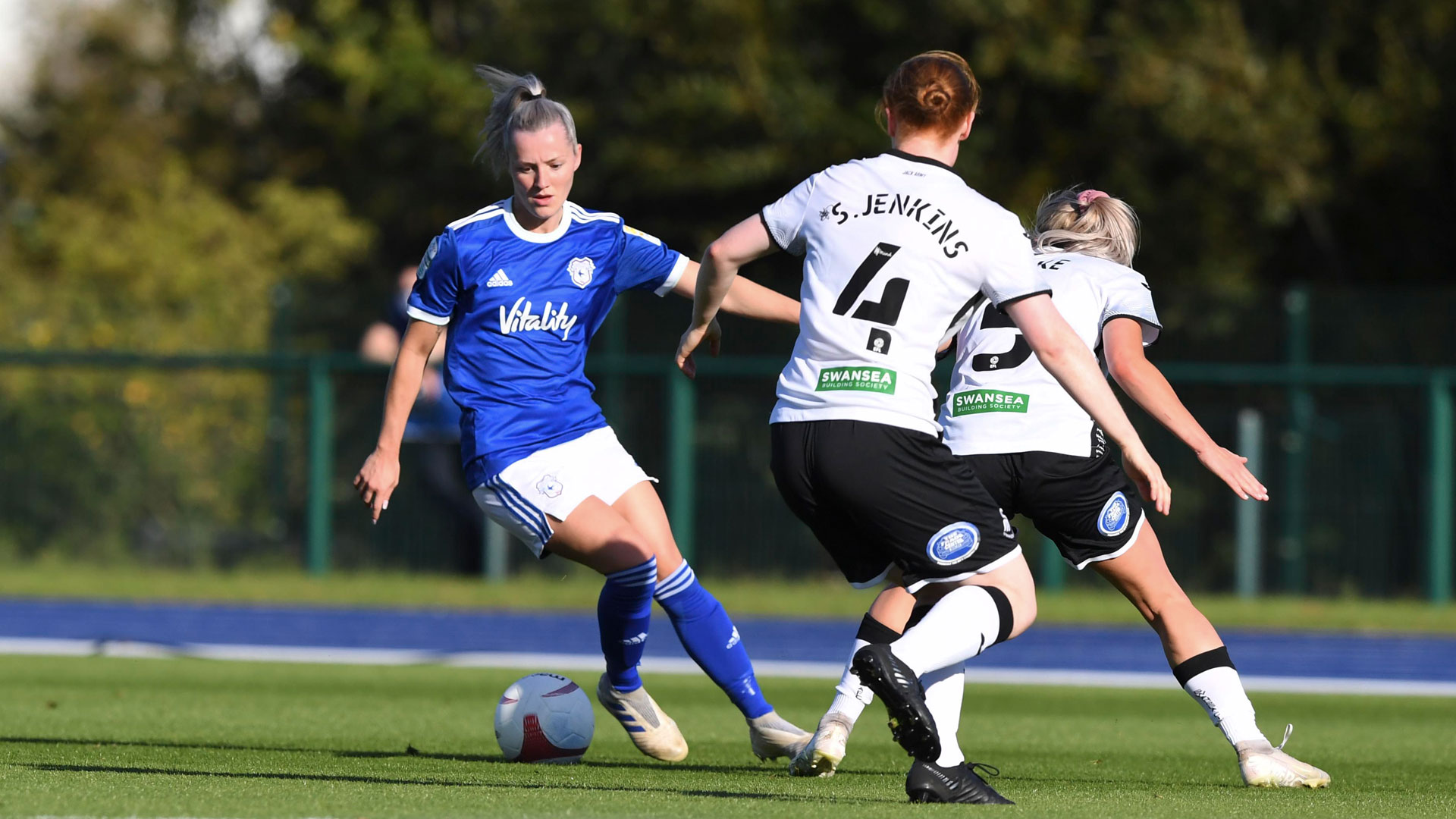 The Bluebirds fell to an opening day defeat against Swansea City Ladies on Sunday, September 27th.

This game will go down as the first ever WPWL match shown on live TV, with Sgorio covering all the action at Cardiff International Sports Campus.

Despite a number of the squad struggling with injuries, Iain Darbyshire managed to name an experienced City line-up for the opening day match. New signing Ffion Price made her debut for the Bluebirds, as did goalkeeper Charlotte Hastings. Fellow summer acquisition Sydney Tiiman was named on the subs bench.

The Bluebirds were hit early on, as the reigning champions took the lead at Cardiff International Sports Campus in the second minute. Defender Shaunna Jenkins impressively volleying home from a corner kick.

After the early goal, the game opened up. The hosts first chance came after half an hour, when midfielder Danielle Broadhurst found space just outside the box. City’s No.10 took aim, but shot over, failing to test Deanna Lewis in the Swansea goal.

The game became more end-to-end as the half went on. Swansea’s lively forward Stacey John-Davis hit the post from distance after 32 minutes while the Bluebirds had their best chance of the half four minutes later.

Forward Catherine Walsh looked to capitalise on a short back pass with 36 minutes played. She managed to round the opposition ‘keeper, but couldn’t divert the ball in from a tight angle, firing wide.

Swansea’s set piece specialist Katy Hosford almost made Cardiff City pay for that missed chance after 40 minutes, but her thirty-yard free kick cannoned out off the crossbar. This was the last chance of an exciting opening half.

Darbyshire made one change at the break, bringing on last season’s Player of the Season, Kate Jeremiah for Zoe Atkins. Despite this attacking substitute for Cardiff City, it was their opponents who scored next. John-Davis with a composed finish for Swansea City from 10-yards after 58 minutes.

The Bluebirds pushed forward in search of a way back into the match, but they were caught out defensively, as Swansea took advantage of the extra space to make it 3-0 with 22 minutes remaining. Chloe Chivers received a long ball down the right wing and after controlling with one touch, aimed a powerful shot into the far corner of the net.

City fought hard throughout the final exchanges to get on the scoresheet and make it a nervy finish, but Swansea held on to secure an opening day win.