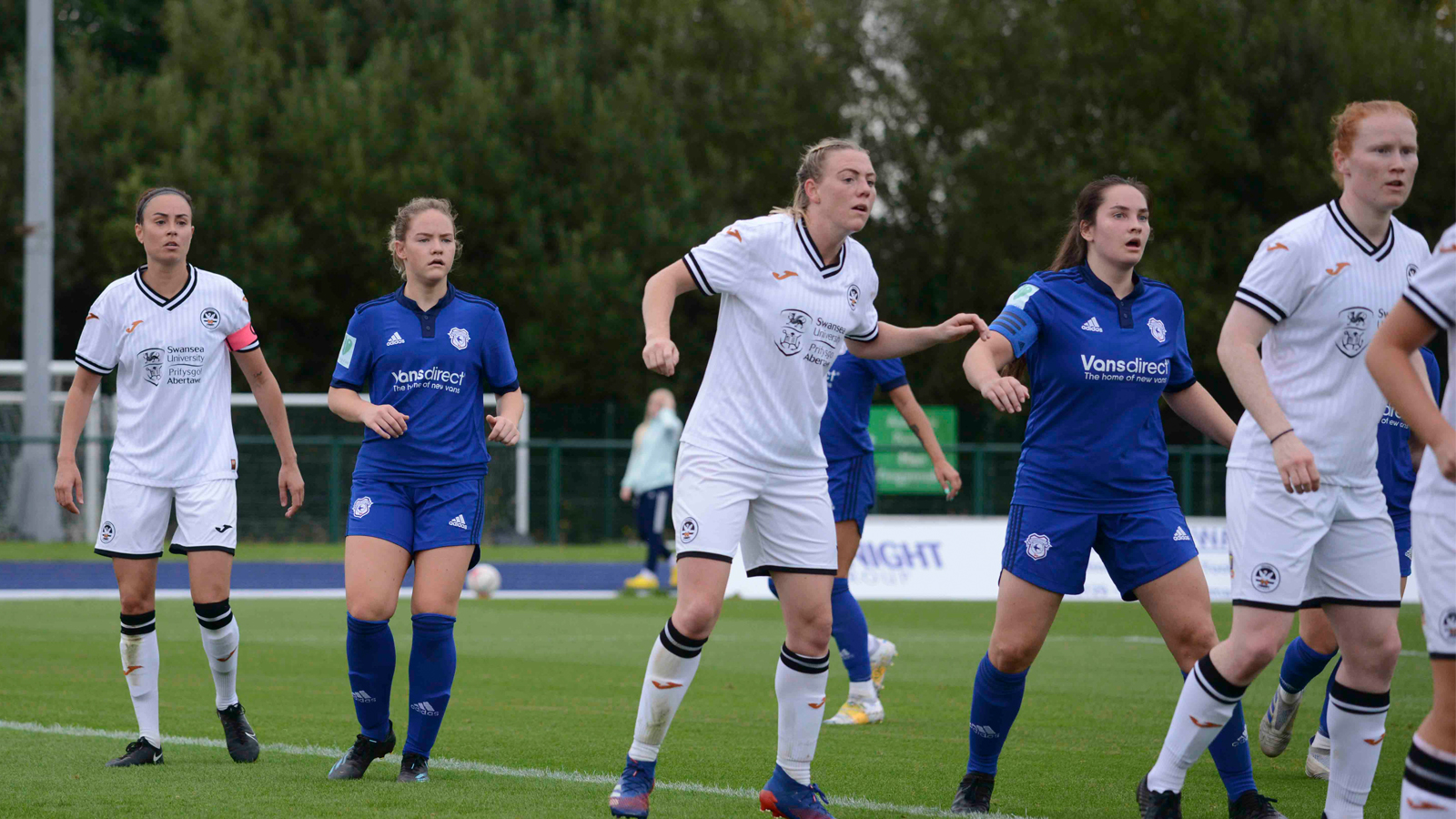 Boss Iain Darbyshire made two changes to the side which defeated Aberystwyth Town last weekend, with Hollie Smith and Phoebie Poole replacing Lisa Owen and Lily Billingham in the starting eleven.

The Bluebirds made an excellent start to the match, with Amy Williams looking lively on the left flank. After driving forward, she delivered a fine pass to Poole, who struck narrowly wide of goal.

However, after 17 minutes it was Williams who opened the scoring, firing home from a tight angle. Ffion Price's dangerous free-kick found its way to Williams at the back post, with the attacker making no mistake to score her sixth goal of the season in all competitions.

The visitors came close to a leveller just two minutes later, with the lively Chloe Chivers striking the crossbar with a fine, looping effort. Thankfully for City, the ball bounced away from the goalline before being cleared from danger.

The Bluebirds continued to put pressure on the Swansea defence, and doubled their advantage after 21 minutes. Poole did well to create space on the right flank before delivering the ball into the box, with Zoe Atkins in position. The forward turned the ball home from close range with a well executed finish to give Darbyshire's side a healthy lead.

The Bluebirds didn't stop there, and netted what turned out to be the match-winning goal just past the half-hour mark. Catherine Walsh picked up the ball inside the opposition penalty area, showed strength and skill to create a shooting opportunity, and fired a low effort on goal. In the slippery conditions, the ball squeezed underneath the arms of Swansea goalkeeper Gemma Border, putting City in a commanding position at the interval.

The windy conditions favoured the visitors for much of the second period, but, despite being out of possession for large spells of the half, City remained solid in defence to limit Swansea to very few chances.

Ceryn Chamberlain was rarely troubled in between the sticks, but did well to keep out a long-range effort which skidded across the surface towards her goal.

The Swans did manage to pull one back after 72 minutes, with substitute Karmyn Carter making an impact. The American forward burst into the box and applied a cool finish to reduce the deficit and get the visitors back into the match.

Neither side were able to dominate possession in the final ten minutes of the match, with the worsening weather making it difficult for both teams to string any passes together. However, set-pieces continued to cause problems in both boxes, with Swansea capitalising on 86 minutes. Carter was again the scorer, bundling the ball home from close range after a dangerous delivery.

Unnerved by conceding a late goal, the Bluebirds saw out the remainder of the game well, keeping the ball in their opponents half and preventing any chances on the counter attack.

The full-time whistle was greeted by huge celebrations from players and supporters, ensuring South Wales bragging rights for the Bluebirds, whilst also ending Swansea's remarkable unbeaten league run, which had stretched back to October 2018.

After the match, Iain Darbyshire expressed his delight at securing a memorable victory, and praised his side for their determination in difficult weather conditions.

"We've waited a long time for this," he began. "It's an incredible feeling to win the derby. In the first half we were so clinical, and we used the wind to our advantage very well.

"I think both teams made the best of it in the conditions. I thought we managed the game very well, and overall the performance was incredible. The girls should be very proud of themselves. For a lot of them, that's their first South Wales derby win, and hopefully it's the first of many.

"To come out on top today is a big step for us, and something that we'll have to take forward and try to replicate if we want to be challenging at the end of the season. We'll enjoy the win tonight, but then we'll be focused straight onto next weekend's game against Aberystwyth. Hopefully we can get another positive result."

He concluded, "I want to give credit to the group at Swansea - to go unbeaten in the league for three years is an incredible achievement, no matter what level you play at. I think they deserve a lot of credit for that, but we're just happy that we're the ones to end their run, and hopefully now we can go on a run of our own."

Highlights of today's match will be available to watch shortly on Cardiff City TV.