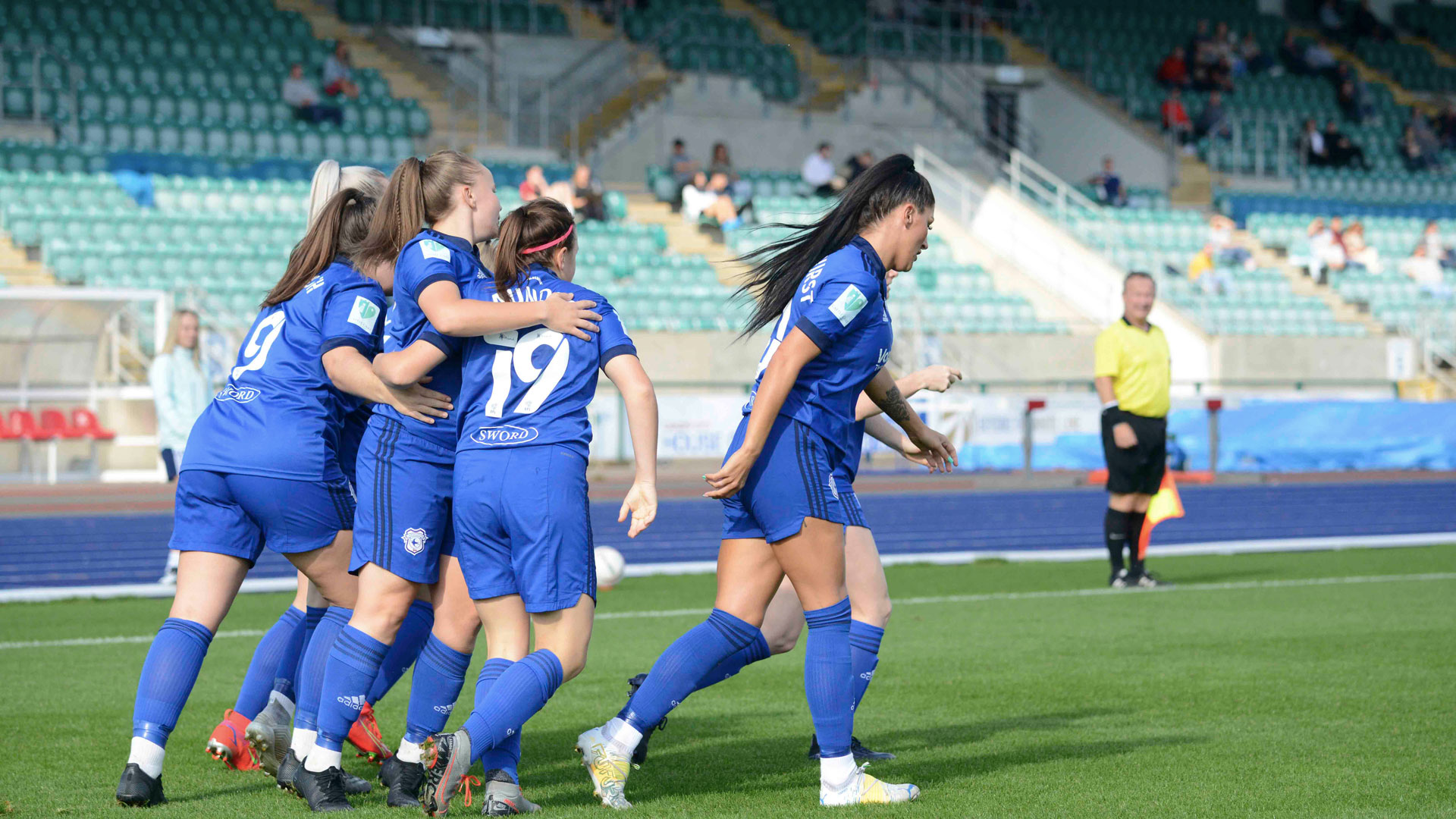 Cardiff City FC Women booked a place in the semi-finals of the Adran Trophy with a 4–1 victory over Barry Town United at Cardiff International Sports Campus on Sunday afternoon.

In a professional performance from City, goals from Megan Saunders, Siobhan Walsh, Catherine Walsh and Zoe Atkins were enough to progress.

City started brightly and created an early chance, as Seren Watkins’ pinpoint corner delivery was headed powerfully towards goal by Atkins, forcing a fine save out of Barry Town goalkeeper Erin Brennan. The Bluebirds continued to create opportunities, as Williams posed a threat on the left, finding space to deliver low into the area, with the Linnets defence just beating Saunders to the ball at the back post.

From the resulting corner, Watkins’ delivery was accurate once more, as midfielder Walsh rose highest to head narrowly over the woodwork. City weren’t to be denied however, as the deadlock was broken in the 25th minute. Some brilliant work down the left from Bayliss saw the defender cross dangerously into the area for Saunders to head home the opener.

Having taken the lead, the Bluebirds immediately pushed forward for a second and were rewarded for doing so, doubling the advantage in the 32nd minute, as another dangerous corner from Watkins was met by captain Walsh, who powered a header past Brennan. Shortly before the break, a brilliant run in-behind from Atkins was picked out by Williams, but the delivery towards Saunders was just cut out, ensuring City went into the break with a 2-0 advantage.

The Bluebirds started the second period on the front foot and looked to add to the lead, as a brilliant effort from Danielle Broadhurst forced a save out of Brennan. In another positive attack for the hosts, Williams beat the offside trap and rounded the Linnets goalkeeper, only for her effort to strike the woodwork. City looked dangerous from set-pieces all afternoon and added a third in the 55th minute, as midfielder Walsh headed home from close-range, following Watkins’ corner.

Striker Atkins, who made a superb impact off the bench at Cardiff Met last week, netted another fine header, as she met Bayliss’ brilliant cross to add a fourth for City in the 64th minute. Barry Town responded well and pulled a goal back three minutes later, as substitute Anna Houghton struck home from close-range.

Boss Darbyshire looked to his bench for reinforcements, giving opportunities to both Indie Jay Morgan and Michaela Major of the U19 side. The latter went close to finding the net late-on, as she was played in by right-back Lisa Owen, only to have her effort saved by Brennan, who kept the final score to 4-1 to the Bluebirds.

“We’re over the moon," Iain began. "We’re targeting silverware this year. We knew it was going to be a tough game. Barry have a very good structure, they bring a lot of young players through, play good football and do things the right way.

“I thought we were excellent throughout. We controlled the game, had a couple of moments at the end where we were a bit sloppy, but overall, it was a good performance and we’re delighted to be through to the semi-final.

Commenting on the introduction of U19’s players Morgan and Major from the bench, Darbyshire added: “They’ve got their opportunity through a couple of injuries, but we believe in them. We’ve got a good group of players in our U19’s, who are ready when we need them. We try and give them as much gametime as possible, getting them into the first-team environment and push them on.

“We’re very excited about those two, but there are more in the U19’s and more in the U16’s as well, who are all really good footballers, so it’s always great to give them minutes.”