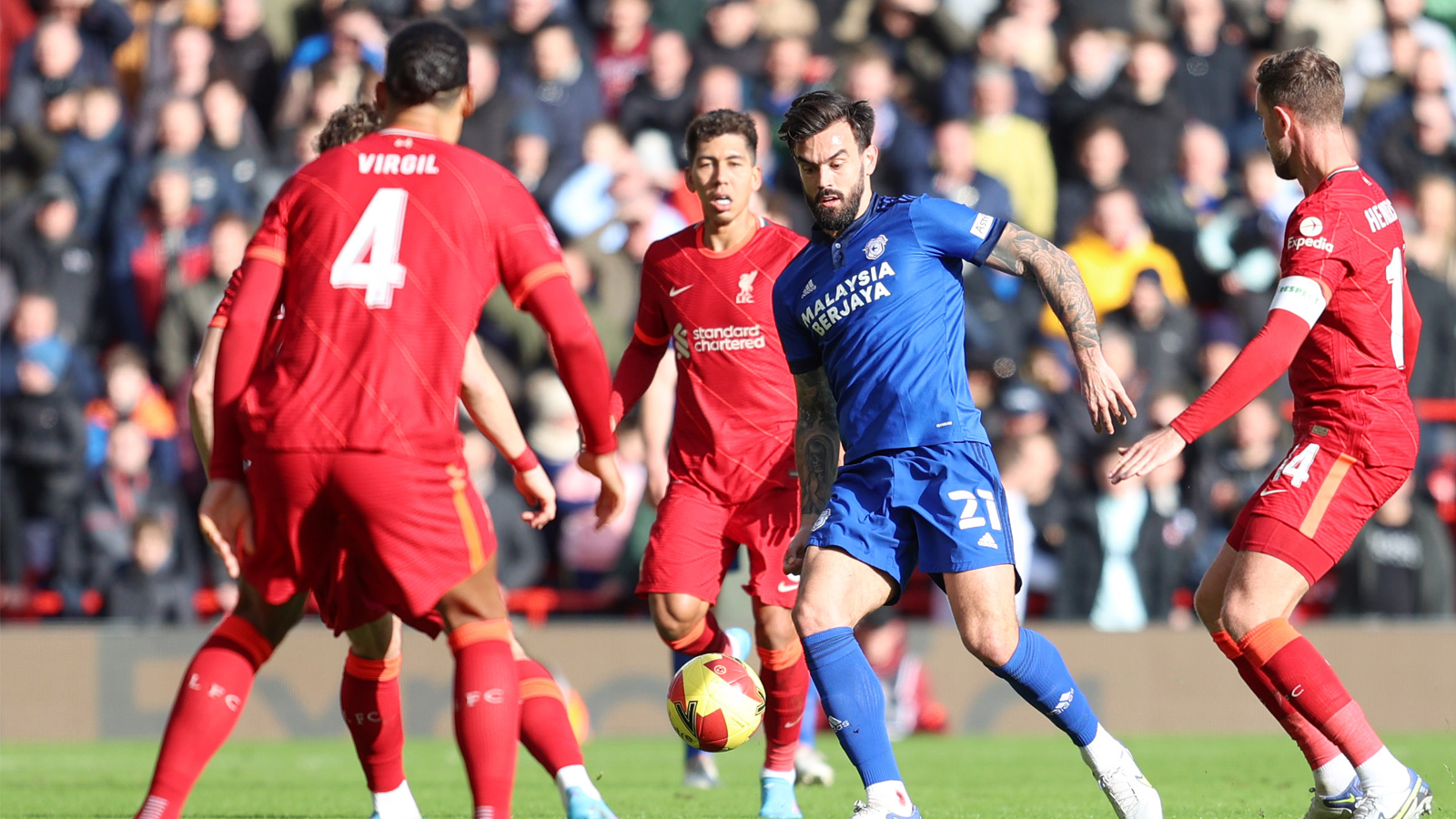 Cardiff City bowed out of the Emirates FA Cup at the Fourth Round stage following a 3-1 loss to Liverpool, despite a spirited performance at Anfield on Sunday afternoon.

The Bluebirds crafted the opening opportunity of the game after four minutes. Marlon Pack strode forward from midfield before unleashing a low shot that was stopped by Caoimhín Kelleher.

The hosts responded with a chance of their own just a minute later. Diogo Jota found the ball at his feet in the area and powerfully struck on target from close range, with Dillon Phillips making a terrific save. Soon afterwards, Takumi Minamino had the ball in the net, though the offside flag came to City's rescue.

A key moment came after 19 minutes, with Mark Harris racing into the box from the left flank. The forward went down under the challenge of Ibrahima Konaté, but the referee waved away protests from the Bluebirds players and supporters alike.

Undeterred, Harris responded to not being given a penalty by speeding along the right flank and delivering a low cross that James Collins, Will Vaulks and left-back Bagan were narrowly unable to meet.

The visitors continued to hunt for the fixture's first goal and an ambitious effort was next to come, four minutes later. Midfielder Vaulks tried his luck with a strong strike from just outside the box’s left edge, but it drifted wide. Liverpool began to take control of possession and created several half chances, but neither side could make the breakthrough before the half time whistle.

After the interval, it took two minutes for City to create the opening opportunity of the second period. 28-year-old Vaulks played the ball forward to Harris, who broke clear and towards goal. A poor tackle from the onrushing Kelleher brought the Welshman down, with the referee opting to show a yellow card to the goalkeeper.

Liverpool went on to take the lead after 53 minutes. Right-back Trent Alexander-Arnold floated a dangerous free-kick which found Portuguese international Diogo Jota, who headed into the far corner. The Reds went close with another header three minutes later, with Phillips keeping out Roberto Firmino’s effort.

The Reds managed to double their advantage with 22 minutes of the 90 remaining. Luis Díaz cut the ball back for scorer Jota in the area, but the ball passed him and reached Minamino, who finished with a powerful, low drive.

The home side maintained the momentum and added a third goal after 76 minutes. Substitute Harvey Elliott controlled the ball in the box and fired into the bottom corner on the turn, with little stopper Phillips could do about it.

City refused to give in, and deservedly got themselves on the scoreeshet three minutes later. Substitute Davies sent 19-year-old Rubin Colwill through on goal, with the Welshman coolly firing home in front of the travelling fans to secure his fifth senior goal and first FA Cup strike.

The Bluebirds hunted for a second, but exited the Cup following an invaluable experience at Anfield. City are next in action on Wednesday, February 9th, when Peterborough United visit Cardiff City Stadium.