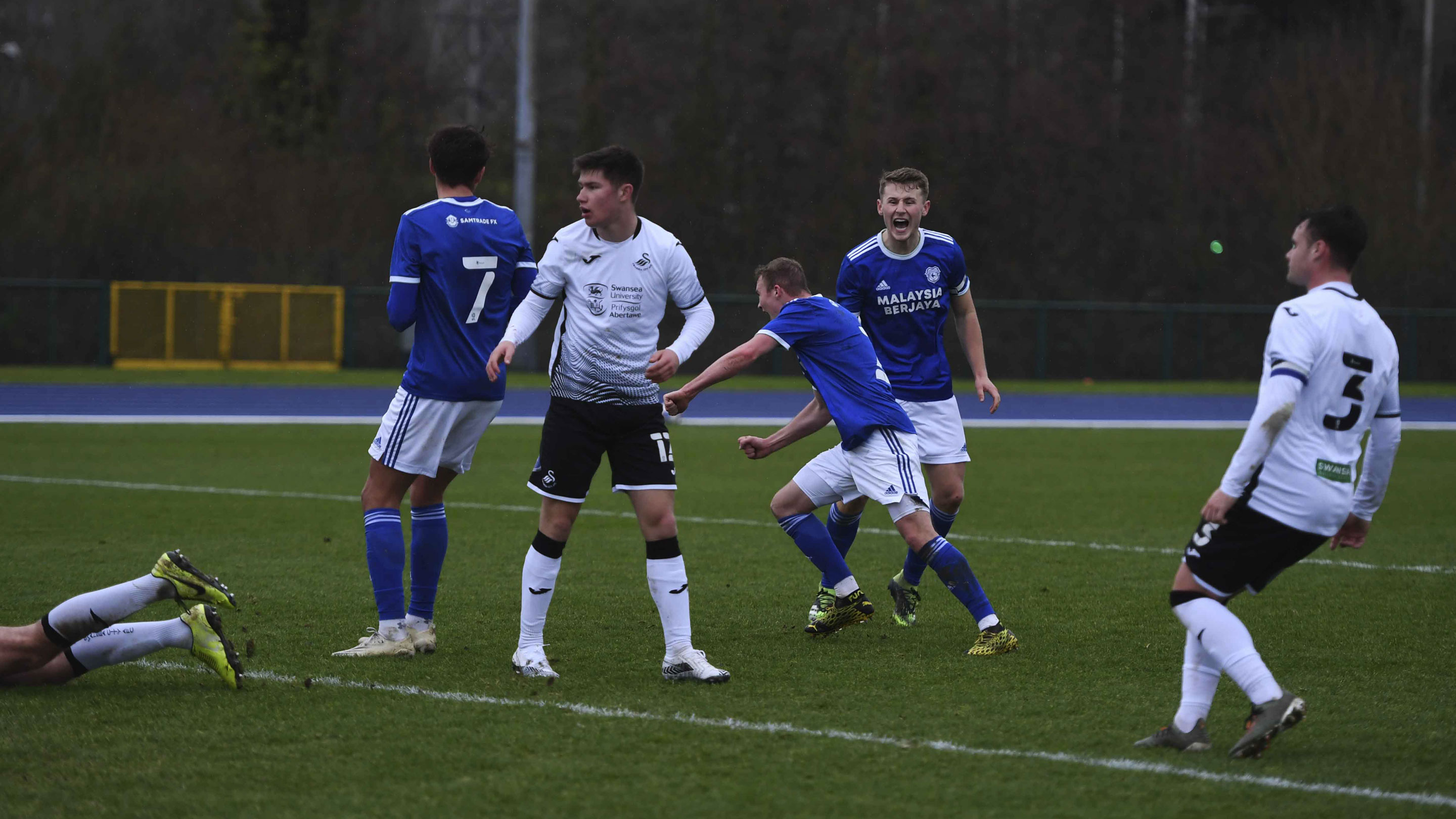 A superb second half showing earned Cardiff City’s U23 team a deserved 2-1 victory over Swansea City.

Coach Steve Morison made two changes to his starting line-up from City’s previous fixture against Charlton Athletic. Kieron Evans returned to U23 action, having been named amongst the substitutes by Neil Harris for Saturday’s Championship clash with Norwich City, whilst young left-back Tom Davies also came into the side.

After a lively start, it was the visitors who made the breakthrough after seven minutes of action at the Cardiff International Sports Stadium. From a short corner, Swansea striker Bradley Gibbings was able to nip in and turn the ball home, giving the away side an early advantage.

However, the Bluebirds dominated the half after falling behind, and created a number of good chances to get back on level terms. Isaak Davies and Rubin Colwill both went close within a minute of each other, seeing headed opportunities saved by Swans goalkeeper Jamie Searle. Despite their pressure, City were unable to find a leveller before the break, going in at the interval a goal behind.

Morison’s men were by far the better side at the start of the second period, and had a golden chance to equalise through Davies. Owen Pritchard picked out the forward with a superb ball which split the Swansea defence, though Davies was unlucky not to convert from close-range, under pressure from keeper Searle.

The away goalkeeper was called into action yet again soon afterwards, providing a magnificent double-save to prevent Colwill and Davies. Searle was first able to parry a powerful strike from City’s impressive midfielder, and then displayed fine reflexes to keep out Davies’ follow-up effort.

However, the Bluebirds did find their deserved equaliser after 67 minutes, with right-back Taylor Jones finding the back of the net. Kieron Evans curled an inviting free-kick into the area, which bounced around the penalty spot and fell kindly to Jones. The 17-year-old made no mistake with the finish, rifling past Searle to put City back on level terms.

With 15 minutes to go, another superb delivery from Evans provided City’s second, as skipper Jack Bodenham powered home. Another free-kick, this time from the opposite flank, was driven towards the back post, with the towering defender able to apply an excellent headed finish into the roof of the net, turning the match around.

The visitors were reduced to ten men for the final few minutes, with Scott Butler picking up a second yellow card for an unnecessary lunge on the hard-working Davies. The numerical advantage worked in City’s favour, as Morison’s side were able to keep possession of the ball and nullify any chance for a Swansea equaliser.

The final whistle confirmed a hard-fought South Wales derby victory for the Bluebirds, who move onto ten points and leapfrog their opponents in the Professional Development League South table. City’s next U23 fixture comes on Tuesday, 2nd February, when league leaders Ipswich Town visit the Welsh capital.