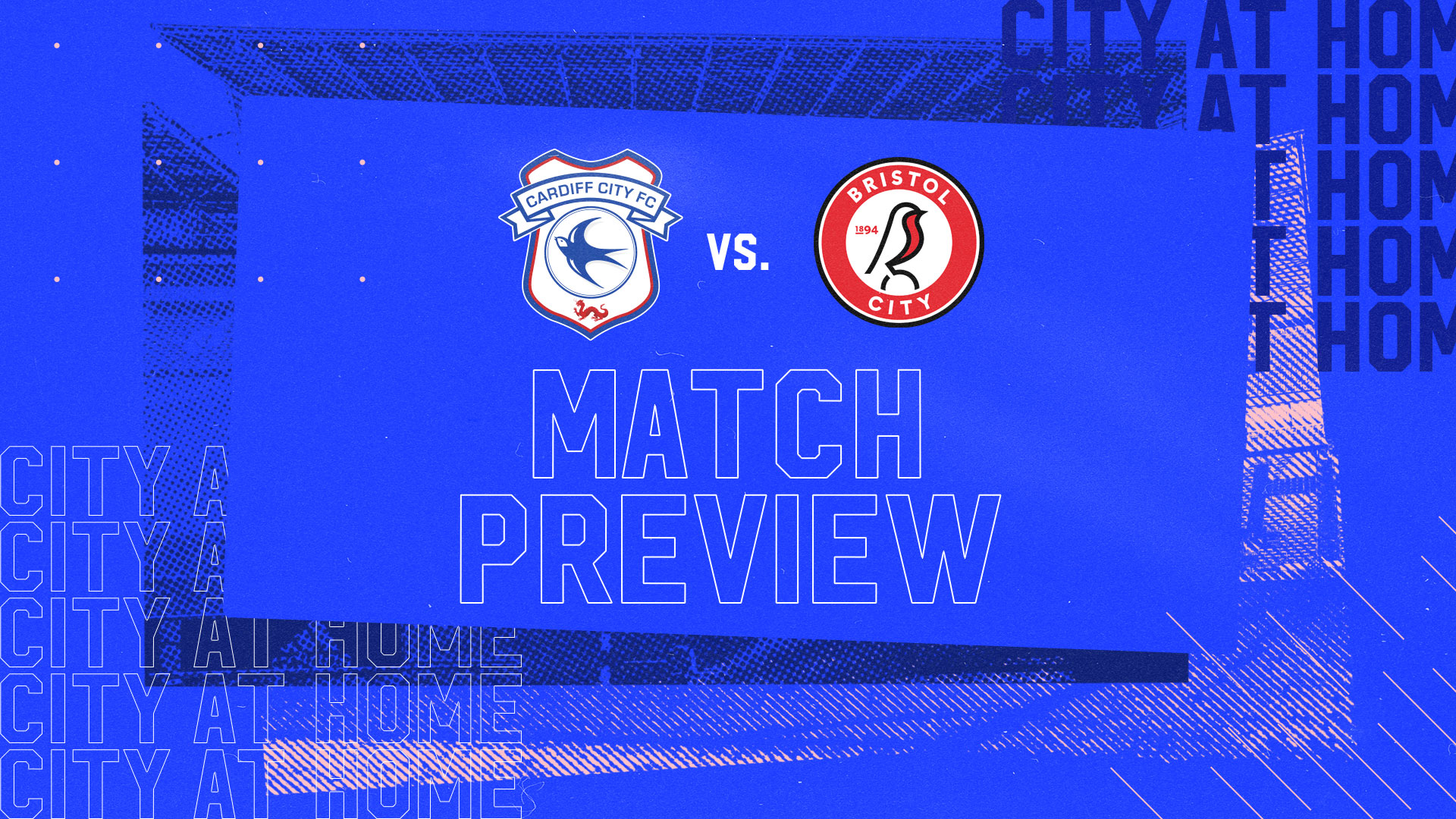 Mick McCarthy’s men take on Bristol City in our final Sky Bet Championship fixture before the international break. Nigel Pearson brings his team to the Welsh capital on Saturday 28th August, with a 12:30pm kick-off at CCS.

Tickets for our home clash with Bristol City are available to purchase here.

Due to this fixture's earlier kick-off time of 12:30pm, as well as not being selected for television broadcast, Cardiff City TV will be able to broadcast the match domestically as well as internationally.

In addition to Saturday's fixture, supporters in the UK can purchase a Monthly Audio Pass to listen in for just £5. For audio throughout the season, purchase an Audio Only Season Pass for £45.

Get hold of the Cardiff City vs. Bristol City matchday programme this weekend, with Aden Flint as cover star and feature interview!

The Bluebird will be available to purchase from selected programme booths and retail departments around CCS.

The Robins find themselves occupying 15th position in the early-season Championship table coming into this weekend’s Severnside derby, with one win, one draw and two defeats from their opening four fixtures. Nigel Pearson’s men looked to have secured a home victory on opening day, with Chris Martin scoring against newly promoted Blackpool, only for the Tangerines to find the back of the net in the 93rd minute to pinch a point from Ashton Gate with a 1-1 draw.

After their Carabao Cup First Round penalty shootout defeat to Forest Green Rovers, the Robins travelled then to the Riverside Stadium, suffering their first league defeat of the campaign at the hands of Neil Warnock’s side. Uche Ikpeazu’s opener was cancelled out by Andy King’s strike on the hour mark, only for Boro’s summer signing Matt Crooks to fire home the winner ten minutes later, condemning Pearson’s men to a 2-1 defeat.

City did record their first win of the campaign with an exciting 3-2 victory over Reading at the Madejski Stadium on August 14th. Andreas Weimann was the hero for the Robins in Berkshire, scoring two goals, either side of Chris Martin’s strike, to secure an important victory for Pearson’s side. However, the Robins slipped to defeat at Ashton Gate in their most recent match, falling to a 1-0 defeat against Swansea City last Friday night.

Andy King became a Bristol City player on July 2nd, signing a one-year deal at Ashton Gate. A former Wales international, King is no stranger to boss Nigel Pearson, with whom he worked under on two separate spells whilst at Leicester City; King lifted the Championship trophy under Pearson’s stewardship in 2013/14. In recent years, the central midfielder has spent time on loan with Huddersfield Town and Rangers, although a January move to OH Leuven – another of Pearson’s former sides – did not quite work out as hoped for the 32-year-old. King scored on his Bristol City debut on August 14th, a 2-1 defeat at Middlesbrough.

Matty James is another ex-Leicester player, who, following the expiration of his contract at the King Power Stadium, has been reunited with Pearson in Bristol. The midfielder, who came through the youth ranks at Manchester United, saw much of his career with the Foxes disrupted by injury, though has flourished during a number of recent loan spells. The 30-year-old impressed for Barnsley in the first half of last season, and then went on to score three goals in 25 appearances for Coventry City during the second half of the campaign. James has slotted straight into the heart of the Robins’ midfield, starting all four of their Championship matches this term.

Rob Atkinson was announced as Bristol City’s third signing of the summer on July 3rd, arriving on a permanent deal from Oxford United. The 23-year-old began his career with Basingstoke Town before sealing a move to Fulham; however, after a loan spell with Braintree Town, the central defender soon moved to Eastleigh on a permanent deal. After impressing in the National League, Atkinson earned a move to Oxford in January 2020, making 44 appearances for the U’s last term as they reached the League One Play-Off Semi-Finals.

Andreas Weimann missed the vast majority of the 2020/21 season with a cruciate ligament injury, but has quickly found his goalscoring form upon his return to first team action at the start of the new campaign. The 30-year-old, who netted ten Championship goals in 2018/19 and seven in 2019/20, has found the back of the net twice so far this term, netting a match-winning brace against Reading on August 17th. The Austrian forward has played the full ninety minutes in all four of City’s league fixtures to date, but did not feature in their EFL Cup defeat to Forest Green Rovers earlier in the campaign.

Chris Martin netted the winner when the two sides met at Cardiff City Stadium last season, tapping home Antoine Semenyo’s cross after just two minutes, which proved to be the only goal in a narrow victory for the Robins. The Scottish striker, who spent the majority of his career with Derby County, has netted two goals so far during the current campaign, against Blackpool and Reading, and also provided an assist against the Royals. The 32-year-old adds plenty of experience to the Bristol City side, having also won 17 caps for Scotland during his career.

Alex Scott signed a new four-year contract at Ashton Gate last weekend, marking a very special 18th birthday for the young midfielder. Scott, who made his Robins debut against Luton Town towards the end of last season, has become a vital part of Nigel Pearson’s side this term, starting all four fixtures in the current campaign. The playmaker, who joined the Robins academy from Guernsey FC in December 2019, has so far recorded one assist for the club, which came during the win over Reading at the Madejski Stadium.