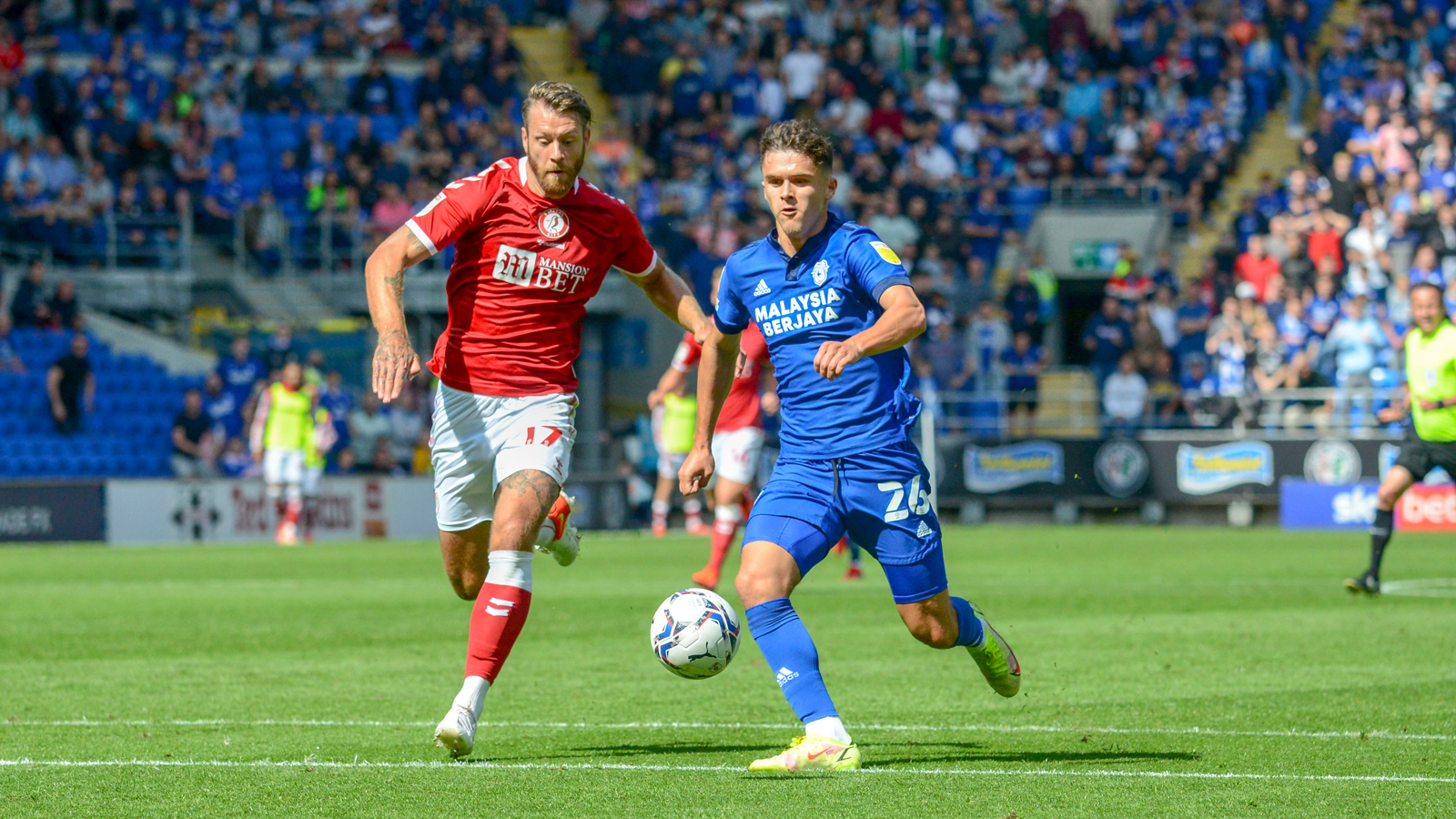 Cardiff City suffered their first league defeat of the season on Saturday afternoon.

Andreas Weimann netted a brace which saw the Robins take all three points from the fixture.

City looked to make an early breakthrough in the Welsh capital, with Joe Ralls trying his luck from the edge of the area after ten minutes. Moments later, pacy forward Giles had a great opportunity to score, latching onto a neat flick from Kieffer Moore before racing through on goal. However, under pressure from his marker, the loanee was unable to get his shot off, and the ball was gratefully collected by Bristol stopper Dan Bentley.

The visitors soon acquired a spell of possession, and found the opener after 21 minutes. The ball was slipped through to Andreas Weimann on the right flank, who turned well and drove into the penalty area. With Aden Flint in pursuit and Dillon Phillips advancing, the Austrian found the far corner to break the deadlock in favour of Nigel Pearson’s side.

McCarthy’s men looked to hit back immediately, and went close through Welsh forward Moore. From a corner kick, the striker collected the ball inside the area and fired towards the far corner, leaving Bentley beaten. Unfortunately, some excellent defending from Robins’ skipper Tomáš Kalas denied City’s number 10; the former Chelsea man had sensed the danger, and produced a fine block on the line to preserve his side’s lead.

The Bluebirds had two further chances just before the half-time whistle, with Joel Bagan going close in the first instance. From Bacuna’s cross, the left-back connected well to head towards goal, forcing Bentley into a one-handed stop at the far post. Moments later, Bacuna had an opportunity of his own, delivering a powerful strike on the volley towards the bottom corner, with Bentley doing well to get down and block the shot, ensuring the visitors would take their lead into the half-time break.

The Robins enjoyed a few half-chances at the opening of the second period, but it was the Bluebirds who soon took control of the action. Ryan Giles was City’s main attacking threat, proving no match for his marker on the right flank, whilst also delivering several excellent crosses into the area. One such cross was met by Marlon Pack, whose effort on goal was deflected behind for a corner.

From the resulting delivery, the Bluebirds deservedly drew level. Pack received the ball in the middle of the Bristol half, delicately sliding the ball into Moore, who broke into the box. The Welshman struck a low cross towards the centre of the box, which, after deflecting off Kalas, nicked off Bentley and into the back of the net, squaring things up with 30 minutes remaining.

Ex-Bristol man Pack had a chance of his own soon afterwards, jumping highest to head the ball on goal following a wayward clearance; however, his effort bounced wide of the target. At the other end, Weimann showed his danger with a powerful low shot, which Phillips confidently parried.

With 19 minutes remaining, Weimann found the back of the net for the second time, striking what was to prove to be the decisive goal of the fixture. Substitute Antoine Semenyo delivered a searching, deep cross, which fell perfectly to Weimann at the back post. The former Aston Villa man produced a fine volley into the back of the net, his fourth goal of the campaign, to give Bristol the lead for a second time.

As the Bluebirds searched for a second equaliser, it was Robins’ goalkeeper Bentley who proved to be the difference. James Collins saw a header on goal stopped by the 28-year-old, with another dangerous cross bravely punched away by the stopper.

McCarthy’s men were unable to find a late leveller, falling to their first league defeat of the campaign. After the international break, the Bluebirds will travel to the City Ground on Sunday, September 12th to take on Nottingham Forest.