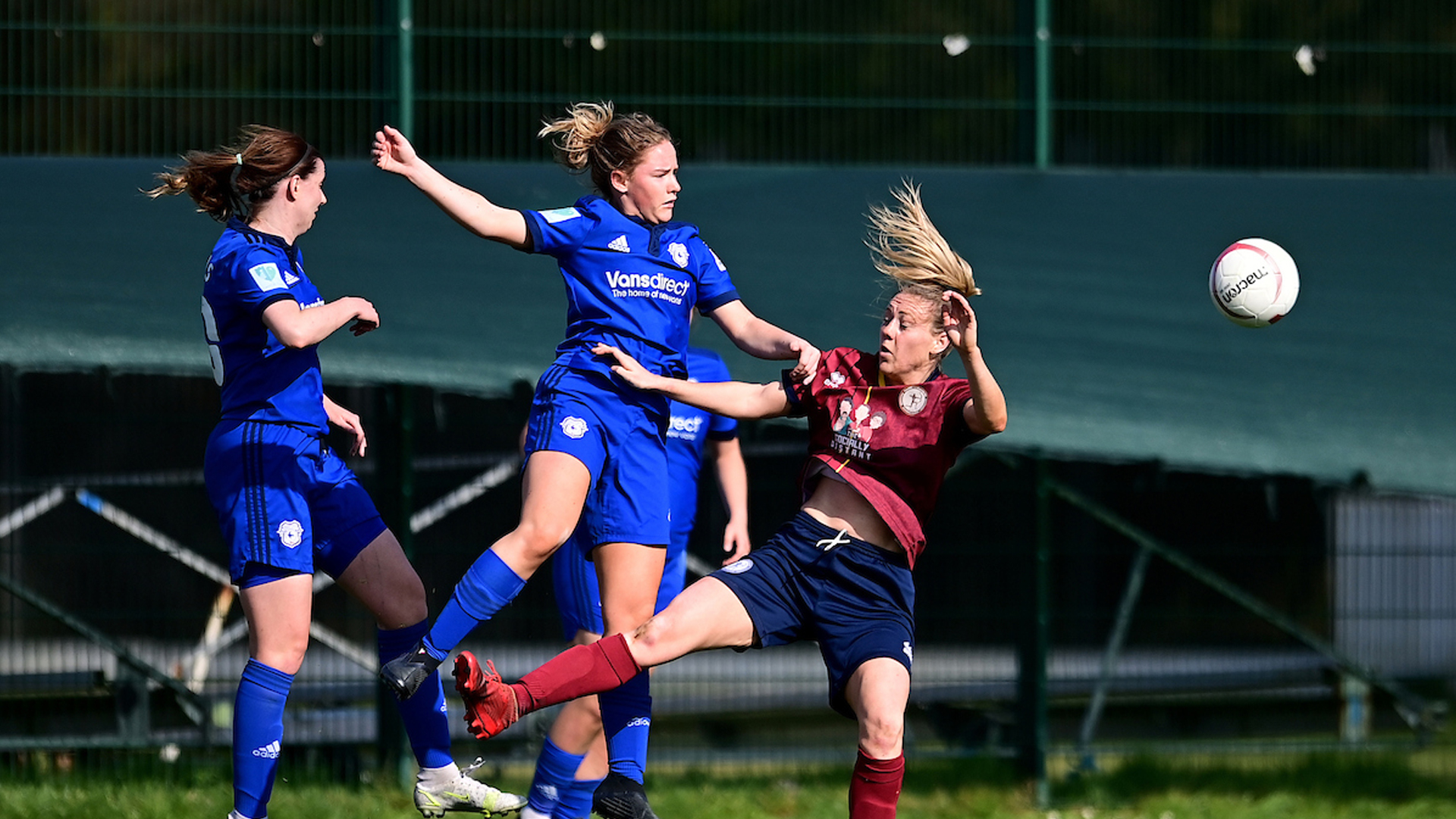 Cardiff City Women fell to a narrow 1-0 defeat to Cardiff Metropolitan University in the final of the Adran Trophy at Dragon Park on Sunday afternoon.

Despite a valiant display from the Bluebirds, impressing in attack by creating numerous chances, Emily Allen’s late goal secured the victory for the Archers.

Boss Iain Darbyshire made five changes to the side that were defeated by Swansea City Ladies last time out, with Ceryn Chamberlain, Siobhan Walsh, Danielle Broadhurst, Zoe Atkins and Phoebie Poole coming into the starting XI.

City started well and forced an early chance, as Lily Billingham’s dangerous delivery was headed down by Walsh, allowing Atkins to strike at goal, but her effort was saved by Annabel Sweeney. Striker Atkins was again involved in another opportunity for City, with Seren Watkins’ corner leading to a goalmouth scramble, as Atkins’ effort was cleared off the line by Stephanie Turner.

Met responded well and created a chance of their own, as Shannon Evans was found in space inside the area by Lauren Hutton Townsend, but fired over the woodwork from close-range. As City continued to threaten, Atkins played a great ball in-behind the Met defence, but Poole was just beaten to the ball by Turner.

In an end-to-end first-half, the Archers went close to opening the scoring, with Jessie Taylor firing at goal from inside the area, but hitting the woodwork with her effort. Shortly before the break, Atkins played another great ball through for Poole, who raced through, but was denied by a fine save from Met goalkeeper Sweeney, who ensured the scores were level at the interval.

Met started the second period well and looked to attack through Evans, who drove at the City backline, only to be denied by some brilliant defending from Hannah Daley. The Bluebirds responded really well and looked dangerous going forward, with Broadhurst’s inviting cross almost finding Poole, before Watkins struck a fine effort into the arms of Sweeney from the edge of the box.

In another positive chance, the ball dropped kindly to Atkins in the area, who struck narrowly over the woodwork. The Bluebirds continued to push for the opening goal, as Amy Williams squared to Poole in the box who fired just over.

Despite City’s pressure, Yzzy Taylor’s side remained a threat, with Laura-may Walkley setting Erin Murray through, only for Ceryn Chamberlain to step up with a brilliant save. With just four minutes to play, the Archers took the lead, as Allen converted at the back post.

The Bluebirds showed character to try and get back into the game, as Williams weaved her way into the box and went down in the area, winning a penalty for City. With Poole stepping up, Sweeney produced a great save to secure the trophy for Met.

After the final whistle, head coach Darbyshire spoke to cardiffcityfc.co.uk:

“I’m incredibly proud,” Iain began. “We were a little bit nervous at the start, but as soon as we settled down, we dominated the game. In the second-half, we could have scored three, four or five goals. Unfortunately, it just wasn’t to be. We’ll just use that as a motivator for the game at the end of the season.”

A huge positive for the Bluebirds was the performance of defender Siobhan Walsh. Darbyshire expressed his pride at his captain’s performance.